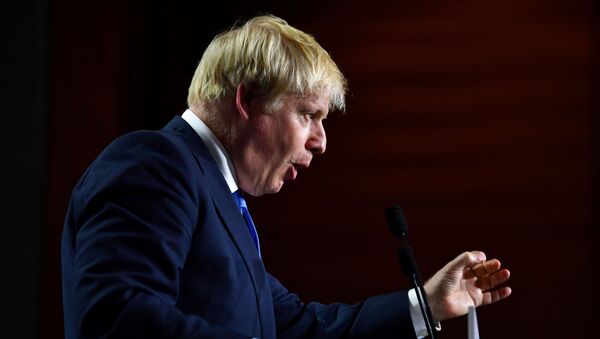 UK lawmakers voted in favour of taking control of the parliamentary agenda of 4 September, signalling a major defeat for Prime Minister Boris Johnson. The parliament voted in favour 328 to 301, with 21 members of Johnson's own Conservative party voting against him.

UK Prime Minister Boris Johnson has started answering questions from MPs in the wake of the British Conservative Party losing its majority in the Parliament.

A total of 21 members of the ruling Conservative Party have been expelled, following their vote against the leader of the party, UK Prime Minister Boris Johnson, in an effort to block a no-deal Brexit.

Following the vote on 3 September, Johnson announced that he would call snap elections, saying he saw this as the only solution to the political crisis in the country surrounding Brexit.

"After Brexit, EU citizens who move to the UK for the first time will be able to apply for a 36-month temporary immigration status - European Temporary Leave to Remain (TLR)", the government said in a document.

"Applications to the new Euro TLR scheme will be simple and free and will be made after arrival in the UK".

Just minutes after it was reported that UK lawmakers had started voting on the Kinnock amendment to the Brexit delay bill it was approved, a deputy speaker announced. Previous reports said that the amendment had been cancelled.

65 lawmakers have voted for the Graham amendment to the Brexit delay bill, while 495 voted against.

Per pool, Trump just weighed in on Boris Johnson and the ongoing political crisis in the UK:

“He’s a friend of mine, and he’s going at it, there’s no question about it. Boris knows how to win. Don’t worry about him.”

"Brexit will allow us to reshape the British economy and reaffirm our place as a world-leading economic power", UK Chancellor of the Exchequer Sajid Javid said, addressing the parliament with a budget speech.

The UK government will have the opportunity to introduce more flexible regulation and get away from "inefficient EU programmes," creating their own alternatives, he noted.

UK Brexit Secretary Stephen Barclay has told EU ambassadors that the bloc was not doing enough to come up with solutions to replace the Irish backstop plan as there are less than two months before the country is due to leave the bloc, The Guardian reported.

The European Union repeatedly warned the United Kingdom that their negotiations are "going nowhere" in response to Johnson’s claim that progress is being made in the talks, The Guardian wrote.

A team of the UK officials led by the prime minister's envoy to the EU, David Frost, will hold talks with the European Commission's negotiating team in Brussels on 4 September.

UK Home Secretary Priti Patel has commissioned a review of the points-based immigration system to see if it would work for her country after Brexit.

"I am asking the MAC … to conduct a review of the Australian immigration system and similar systems to advise on what best practice can be used to strengthen the UK labour market and attract the best and brightest from around the world", she wrote.

In addition to the ongoing review of possible salary thresholds for migrants, MAC will be required to consider what it takes to replace the dual system — which allows EU workers of all skill levels to work in the country while admitting only skilled workers from third countries — with a skills-based one.

The minister suggested that prospective migrants be given points based on the desirable attributes they possess. These include educational qualifications, language proficiency, work experience, and willingness to work in particular areas and occupation.

"The prime minister failed to answer my questions about food supply, about medicine supplies and about the problems in hospitals [in the wake of a no-deal]. He refuses to publish the Yellowhammer documents and he talks about scaremongering. Where does the information come from other than his office and his government? … He is now prepared to spend 100 million pounds of our money on an advertising campaign in order to try to persuade people that everything is fine. He knows it’s not. They know it’s not. He is hiding the facts!" Corbyn said.

"The purpose of the bill is very simple. It is to ensure that the United Kingdom does not leave the European Union on the 31st October without an agreement", opposition Labour lawmaker Hilary Benn stated.

"The bill is deliberately open as to the purpose of the extension".

Labour's finance policy chief John McDonnell stated the party wanted the bill to get Royal Assent, adding that "we're also not going to be tricked or conned by Johnson so we're looking at every way in which, having secured the legislation, he can't wriggle out of abiding by the law and implementing it".

"If we are going to make sure we have successfully taken no-deal away from where we might end up that has to be implemented in full - and if we didn't do that the risk would clearly be that the prime minister would simply be in charge of the process and get to that position by default", unior finance spokesman Jonathan Reynolds said.

Theresa May is having a joke with John Redwood now. She is loving life #SpendingReview pic.twitter.com/0wo7b7pSAN

J. Scott Marcus, a Senior Fellow at Bruegel, a Brussels-based economics think tank, and an independent consultant has commented on the cost of a no-deal Brexit and the possibilities of the EU giving Johnson what he wants.

In essence, Johnson (like many Brexiteers) has wanted from the start to have nearly all of the benefits of EU membership with none of the responsibilities. His current negotiating posture with the EU and with his own Parliament assumes that the EU will be motivated to cut a deal that is highly favourable to the UK.

This is a completely flawed vision. The UK is under far greater pressure than the EU, for the simple reason that the EU represents a far greater share of the UK's international trade than vice versa. The EU has long since "priced in" the cost of a no-deal Brexit, and is not happy with it but can live with it. It is less costly than the damage that would be done to the EU by granting special favours to the UK that every other member state would then insist on.

So the EU is not going to give Johnson what he wants. It is as simple as that. Johnson and his cohorts are still in denial - they have an unrealistic vision of the UK's value and importance.

Parliament either will or will not, force a change of course. This will possibly be resolved in the next 24 hours. What exactly will happen is unclear, but it is clear that Johnson has lost his majority.

Tory Rory: Conservative MP Says He Was Thrown out of Party by Text While Grabbing Best Politician Award
11:49 GMT 04.09.2019

Boris Johnson swears in the Commons as he quotes Angela Rayner’s description of Labour’s economic policy as “shit or bust”.
“I believe it’s both,” says the PM. #PMQs

Irish Foreign Minister Simon Coveney has stated that the government wants to send a very clear message to every business in Ireland that “we need to prepare for the worst”.

"I think that tariffs on Scotch whisky would be absolutely absurd - a point that we have made repeatedly to our friends in the United States", Johnson said.

"Can I invite the leader of the opposition to confirm, when he stands up shortly, that if that surrender bill is passed, he will allow the people of this country to have their view on what he is proposing to hand over in their name, with an election on October the 15th", Johnson stated.

Corbyn and his surrender bill would mean years of uncertainty and delay. I am determined to lead this country forward and take Britain out of the EU on October 31st 🇬🇧

"This government will take this country out of the European Union on October 31st, and there is only one thing that stands in our way, it is the 'surrender bill' currently being proposed by the leader of the opposition [Corbyn]", Johnson told Parliament.

The European Union is still in talks with Dublin over how to carry out border checks on the island of Ireland in the event of a no-deal Brexit but such controls would inevitably be "disruptive", according to EU officials.

British Labour leader Jeremy Corbyn has just had another meeting with opposition leaders this morning who concluded that they wouldn’t support elections until confident the no-deal threat has passed, a BBC political editor reported.

Corbyn has told opposition parties that Labour will not fall for "Boris Johnson's tricks".

"There is a UK government in place so our interlocutor at the highest political level for (Commission) President Juncker remains Prime Minister Johnson", a Commission spokeswoman told a regular briefing.