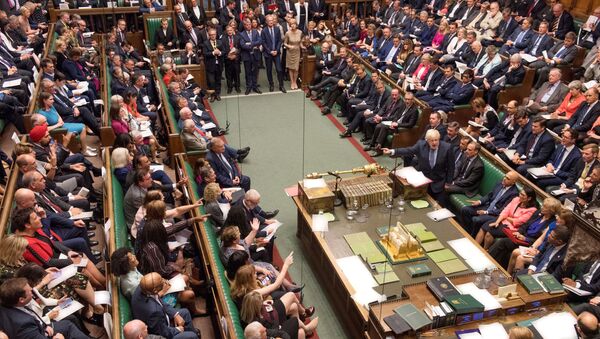 Since assuming office, Johnson has been pushing for withdrawal by the 31 October deadline even without a deal. Because he lost the parliamentary majority, the prime minister can no longer guarantee that UK lawmakers will ratify any potential deal, should Brussels agree to renegotiate.

The UK House of Commons has adopted a piece of legislation to delay Brexit beyond 31 October in the absence of an agreement with the EU; it has now been submitted to the House of Lords for approval.

British lawmakers in the lower house of Parliament voted 327 to 299 in favour of the plan.

Late on 3 September, UK lawmakers voted 328 to 301 to take control of the following day's parliamentary agenda, which would allow them to introduce a bill forcing a three-month extension to the UK departure date. The results of the vote revealed that 21 members of Johnson's Conservative Party had voted against him on the same day.

London and Brussels have been at odds over the Irish border arrangement for months, with UK Prime Minister Boris Johnson trying to scrap the plan from the Brexit deal and the European Union refusing to renegotiate it.

The United Kingdom voted to leave the European Union in 2016, but the withdrawal was delayed several times. After then-Prime Minister Theresa May failed to come up with an acceptable plan to leave the bloc by 29 March of this year, the deadline was moved to 31 October.