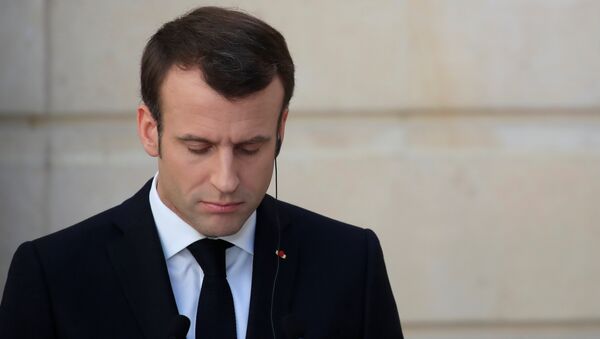 © REUTERS / Gonzalo Fuentes/Pool
Subscribe
Amid negotiations to save the Iran nuclear deal, French President Emmanuel Macron reportedly offered a $15 billion loan to Iran as compensation for US withdrawal from the pact. It's the first practical proposal to help restore Ir an's oil exports amid US sanctions, Massoud Shadjareh, founder of the Islamic Human Rights Commission, told Sputnik.

If Washington does not block France’s proposal, a credit line of $15 billion would be established for Iranian oil "pre-purchases" as a condition for Tehran to return to "full compliance" with the 2015 Joint Comprehensive Plan of Action (JCPOA), also known as the Iran nuclear deal.

Over the weekend, Iranian Foreign Minister Mohammad Javad Zarif also told the French president that Tehran would enter the third stage of scrapping the nuclear deal on September 6 if the remaining signatories fail to ensure that Iran’s interests are protected. In that case, Tehran said that it would start enriching uranium beyond the 3.67% purity limit set by the JCPOA and gradually abandon its nuclear obligations in 60-day intervals, Sputnik reported.

“The reality is, if we’re going to move forward rather than going backward, we need to see some sort of change in the practical commitment by the Europeans, Russians and Chinese,” Shadjareh told Radio Sputnik Loud & Clear hosts John Kiriakou and Brian Becker.

“[I]f we’re going to keep this agreement alive, then efforts need to be made in that direction rather than just waiting for it to die, which has been the position until now. This is sort of the first time we are really seeing some practical suggestions ... being made. I don’t know if it’s enough. Iran doesn’t want [a] handout. Iran wants to just be able to sell its oil and benefit from the agreement,” he said, also noting that the “only ones who don’t agree” with the deal are US President Donald Trump and Israeli Prime Minister Benjamin Netanyahu.

“If you look at the behavior of Israelis in this episode from the beginning until now, we see that no matter what the agreement would have been, Israel would have been opposing it. Israel doesn’t want to have tranquility and peace in the area, because Israel needs conflict to sort of bring fear before its own citizens so they will unite behind his [Netanyahu’s] barbaric policies, but also to get the rest of the world supporting [those policies],” Shadjareh noted. Regional tensions in the Middle East escalated over the weekend after Israel attacked military group Hezbollah along the Lebanese border, resulting in cross-border fire. Tel Aviv’s attack is just the latest in a slew of airstrikes across the region in recent weeks, which Israel claims were against Iran-backed groups being armed to attack Israel.

“It seems quite positive,” Shadjareh said, referring to the recent talks between Iran and France.

“The voices coming out of Iran and France indicates that they are very [close] to making some sort of deal. But at the same time, I don't know if you’ve read some of the literature coming out of Israel in the main newspapers: they’re articulating that Netanyahu is very scared of Trump doing some kind of deal. The reality is, Israel doesn't want a deal. It seems [that the] US wants some sort of deal, because it doesn’t have another option,” Shadjareh told Sputnik.

“China and Russia cannot afford to see Iran on its knees - look at Yemen; look at Syria. Iran is winning the geopolitical and even military sort of battles around [the region], and so the fact of the matter is anyone with any sort of wisdom will see that if there is a deal to be made, it needs to be made now, and failure to do so would be detrimental to the Europeans, because they are not able to move forward and continue this situation,” Shadjareh added.