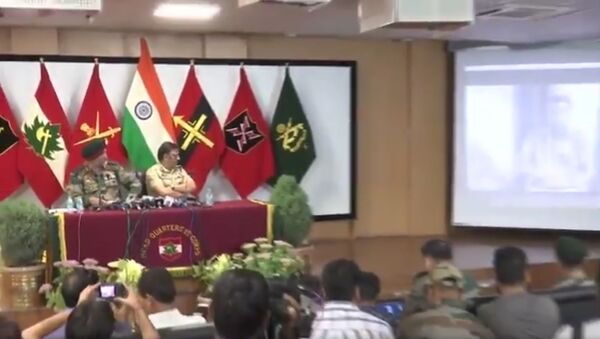 New Delhi (Sputnik):  To demonstrate that Pakistan is working day and night to ensure terrorists infiltrate the Kashmir valley, the India Army on Wednesday released a confessional video of two Lashkar-e-Taiba terrorists held on 21 August.

Indian Army's Srinagar based Chinar Corps Commander, responsible for guarding 450 miles of de facto border -- the Line of Control, claimed the army has video evidence establishing that Pakistan is sponsoring terrorism in Kashmir, and is making bids to disrupt the peace and harmony in the valley, especially since the revocation of the special status of Jammu and Kashmir on 5 August.

"I have come from Pakistan, Rawalpindi, Jalebi Chowk. My village name is Jedaban. I work for Mujaheedeen with LeT. My companion Nazeem and I were trained for a week in Kacherban area (near Rawalpindi)," one of the persons can be heard saying in the confessional video.

The second person in the video, also claims to be from Rawalpindi and allegedly admits that the two men have worked together for five years, and have planned to cross the border together.

Chinar Corps Commander, Lieutenant General K.J.S. Dhillon also added that the army had stopped several infiltration attempts in the past few weeks as "Pakistan is desperate to infiltrate the maximum numbers of terrorists into the Kashmir valley to disrupt the peace".

Earlier on 2 August, the Indian Army also seized a cache of US-made M-24 sniper rifles, along with telescopes and landmines, from militants who allegedly wanted to attack Hindu pilgrims heading to undertake an annual pilgrimage in the Kashmir Valley.

Last week, Indian Army Chief General Bipin Rawat alerted soldiers to be on the alert for infiltration attempts because terrorists, he said, were ready to enter India from multiple launch pads.

Tensions between the nuclear-armed neighbours have risen since New Delhi amended Article 370 which had granted Jammu and Kashmir special status.