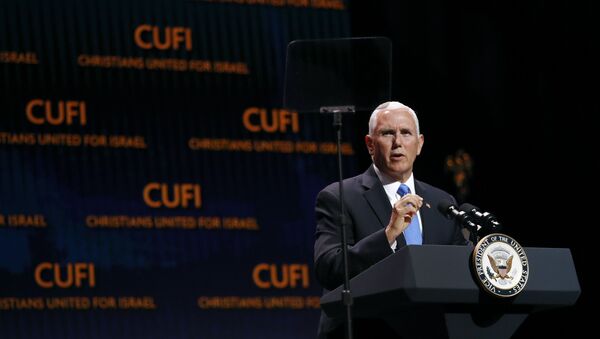 Tim Korso
All materials
The vice president's statement comes on the same day as UK lawmakers returned from a break and will hold a crucial vote that could hinder Prime Minister Boris Johnson's ability to carry out a no-deal Brexit on 31 October and force him to delay the divorce, if a new agreement isn't reached with the EU by that date.

US Vice President Mike Pence has called on all parties to the Brexit talks to negotiate a new agreement that would respect London's concerns and, at the same time, would prevent the disruption of commercial activities between the UK and the European Union.

"As the deadline for Brexit approaches, we urge Ireland and the European Union as well to negotiate in good faith with Prime Minister Johnson and work to reach an agreement that respects the United Kingdom's sovereignty and minimises disruption to commerce", Pence said.

Pence also extended his support to London in its Brexit efforts and said that the US understands the difficulties that both the UK and the EU are facing in resolving the Irish border issues. He also urged for the resulting deal to respect the Good Friday Agreement on Ireland's governance, which was reached in 1998.

Crucial Vote Ahead of Prorogation

The US vice president's remarks came ahead of a pivotal vote that is to be held on 3 September in the British Parliament. The bill in question would force Prime Minister Boris Johnson to postpone Brexit if he fails to reach a new deal with the EU, preventing him from going through with a no-deal withdrawal on the 31 October 2019 deadline. Johnson's office warned that if the bill passes, he will call snap elections in a bid to gather support for his Brexit plans.

The proposed bill comes as a response from Remainers in Parliament to Johnson ordering a prorogation of the legislative body starting from 10 September and ending on 14 October. The prime minister's move greatly limited lawmakers' ability to prevent a no-deal Brexit, since they are left with very little time to introduce the necessary legislation before the 31 October deadline. The prorogation sparked criticism against Johnson, both among lawmakers and parts of the public, with some accusing him of conducting a coup.

Boris Johnson assumed the post of prime minister in July 2019 after his predecessor failed to negotiate a Brexit deal with the EU. He intends to leave the European Union by 31 October, delivering Brexit regardless of whether a deal will be reached with the bloc or not. While Johnson hopes to renegotiate the deal reached by previous Prime Minister Theresa May, he is also ready to proceed with a no-deal scenario if that is necessary to pull the UK out of the EU on schedule.

Former Prime Minister May negotiated several deals with the EU, but failed to convince the Parliament to approve any of them. One of the key stumbling blocks has been the so-called "backstop clause" embedded in May’s deal and which is deemed as unacceptable by some Brexiteers.

The backstop clause was designed by the EU to prevent the establishment of a hard border in Ireland after Brexit by temporarily tying Northern Ireland's regulations to those of the EU’s single market until a "soft border" solution is found. Opponents of May's deal believe that the backstop could potentially be used to technically keep the UK in the EU's customs union for an undefined period of time, as the clause doesn't have a time limit, essentially undermining the notion of Brexit.