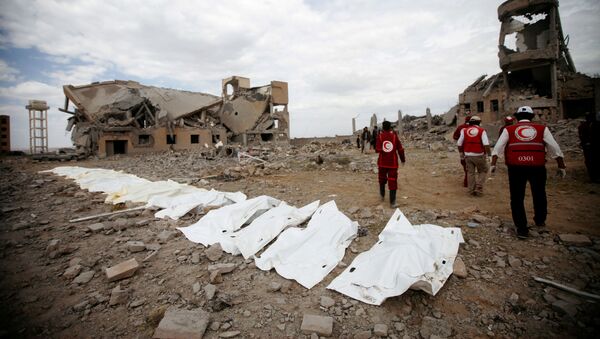 A new report from the United Nations Human Rights Council (UNHRC) accused the United States, France and Britain of possibly being complicit in numerous war crimes for their respective roles in aiding the violations of international humanitarian law that have taken place in Yemen within the past five years.

The UNHRC’s Group of Eminent International and Regional Experts on Yemen published a report Tuesday that called for the US, France and Britain to halt the trade of arms and support to a Saudi-led coalition that is known to use starvation of civilians as a war tactic.

According to the 274-page document, the names of over 160 top military and political individuals belonging to Saudi Arabia, Yemen and the United Arab Emirates (UAE), as well as the Houthi movement, have been forwarded to the UN’s High Commissioner for Human Rights, though the report did not clarify whether any of these “main actors” are potential suspects of war crimes.

Shellings, sniper fire, airstrikes, landmines, arbitrary killings, torture and other abuses in Yemen were also attributed to the Saudi-led coalition. Additionally, the report noted that members of the Houthi movement have shelled cities and used “siege-like warfare” in their strikes against the Saudi coalition.

Warning: Footage contains extremely graphic scenes that may be disturbing and unsettling to some viewers.

Furthermore, the report highlighted that France and the UK belong to the 2013 Arms Trade Treaty (ATT), which prohibits the transfer of conventional arms if the selling country suspects they would be used to commit war crimes or other mass atrocities.

“The legality of arms transfers by France, the United Kingdom, the United States and other States remains questionable, and is the subject of various domestic court proceedings,” the report noted.

Back in June, the UK Court of Appeals declared that its country’s arms sales to Saudi Arabia were unlawful and accused ministers of turning a blind eye to the atrocities that were going to be committed in Yemen as a result of the trades.

Similarly US Congress made multiple attempts to halt weapons sales to Saudi Arabia, but was ultimately blocked by US President Donald Trump, who said that the lawmakers were “undermining bilateral relationships of the United States and impeding our ability to support key partners at a critical time.”

According to Trump, not supplying arms to the Saudi-led coalition "would likely prolong the conflict in Yemen and deepen the suffering it causes."

“The American regime or system does not want this war to end, and it’s very clear even with the respectable efforts by some in the House and the Senate, the majority of the system still viewed this as an American interest, to continue this war,” Ali al-Ahmed, director of the Institute for Gulf Affairs, told Sputnik on July 30.

“At the end of the day, as many American politicians and British politicians, they all talk about jobs. And even media would say this is about jobs, because the more we sell weapons, the more we keep American or British jobs.”

The UNHRC group’s Tuesday report also details that humanitarian relief has been “deliberately impeded” to the reported 80% of the Yemeni population that is in need of aid.

The Saudi-led coalition has been embroiled in a battle with the Houthis since March 2015, and estimates from the Armed Conflict Location and Event Data Project indicate the conflict’s death toll has amounted to as many as 91,000 individuals, with tens of thousands of those being civilians.