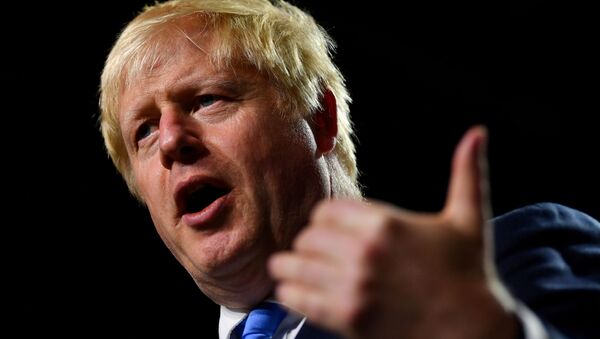 The Prime Minister is addressing the House of Commons about the outcome of the recent G7 summit in Biarritz. But he is struggling to hold together the Conservative Party.

Tory MP Phillip Lee has crossed the floor of the House of Commons to the Liberal Democrats in the middle of a speech by the Prime Minister Boris Johnson.

The defection of Dr Lee, 48, who is the MP for Bracknell in Berkshire, has abolished the government’s majority of one, despite the support of 10 DUP MPs.

Dr Lee said, in a statement explaining his defection: "This Conservative government is aggressively pursuing a damaging Brexit in unprincipled ways."

Liberal Democrat leader Jo Swinson said the government had lost his majority with Dr Lee's defection and said he had done so partly because, as a doctor, he feared the NHS was not safe in the hands of Mr Johnson because of a no-deal Brexit and the possibility of it being handed over to US private health companies.

​Several Tory MPs, including former Chancellor Philip Hammond, are set to support a motion on a bill in a vote on Tuesday night, which would take control of the Brexit negotiations away from the government.

Mr Johnson referred to it as “Jeremy Corbyn’s surrender bill” and he said he would not support it.

The Prime Minister said: “Everyone in this government wants a deal…but this House has rejected a deal three times.”

“This week we are intensifying the pace of meetings. Our friends in Europe can see we want to make a deal,” he added.

Going going gone - @BorisJohnson’s majority. As PM got up in the Commons he saw that Phillip Lee was no longer sitting behind him as a Tory MP but had crossed the floor to sit besides @joswinson as a new Liberal Democrat recruit

The British people voted by 52 percent to 48 percent to leave the European Union in a 2016 referendum.

Mr Johnson's predecessor, Theresa May, sought to obtain a Brexit withdrawal agreement but her deal was rejected three times by Parliament and she eventually resigned in May.

Mr Johnson won the ensuing Tory leadership contest and when he moved into 10 Downing Street he insisted he would push through Brexit before 31 October.

On Tuesday ​Mr Johnson repeated that his government was determined to leave the EU on 31 October "come what may", even if that meant without a deal.

"We will be ready," Mr Johnson added.

Just cheered at television as Phillip Lee crossed floor to join Lib Dems like it was a live recoupling on Love Island. I genuinely don’t recognise myself anymore.

​​He said: “We promised the people we would get Brexit done. Enough is enough. They want the referendum respected. We will negotiate a deal and though I am confident of getting a deal but we will leave on 31 October without one if necessary. There will be no further pointless delay.”

MPs frequently interrupted Mr Johnson in a rowdy House of Commons and the Speaker, John Bercow, had to call for “order” repeatedly.

​Mr Corbyn said the government had not put forward any meaningful suggestions to change the Irish backstop.

Mr Corbyn said it was not just a “government in chaos” but a government which was full of “cowardice”.

He said Labour would protect jobs and democracy from what he described as a "reckless" government.

After an intervention by Labour MP Hillary Benn, Mr Johnson said the reality was that many MPs like Mr Benn were trying to "block Brexit."