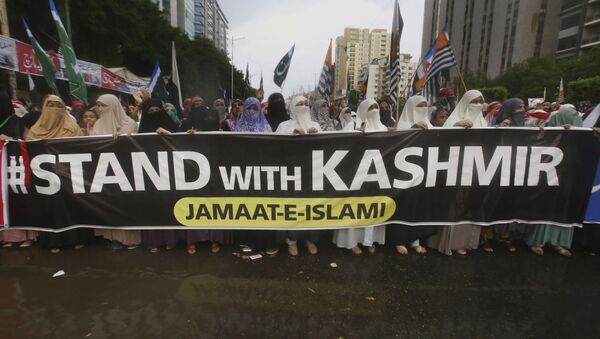 New Delhi (Sputnik): Pakistan has announced the setting up of a separate cell to internationalise the Kashmir issue more effectively.

The country’s Foreign Office on Tuesday inaugurated its Kashmir cell, with the objective of adopting a more focused approach in its efforts to highlight existing restrictions in Indian-administered Kashmir.

Islamabad also announced that all its diplomatic missions will be equipped with Kashmir-centred cells to reiterate its stance on an issue that has dominated the political and diplomatic discourse bilaterally between India and Pakistan, as well as has been prominent internationally, for decades.

Tuesday’s move comes in the wake of Pakistan opposing India’s decision last month to abrogate the special status granted to its side of Jammu and Kashmir through the revocation of Article 370 of the Indian Constitution.

“The Kashmir cell will work 24 hours a day and we are expecting good results from it”, Pakistani daily the Express Tribune quoted Foreign Minister Qureshi as saying optimistically.

The first meeting of the new cell was also held today to discuss ways by which Pakistan could highlight the Kashmir issue on international platforms.

Islamabad has claimed that India’s decision to revoke Article 370 and alter the territorial status of Jammu and Kashmir is a direct violation of the Simla Agreement of 1972. New Delhi, on the other hand, says the decision to revoke the region's special status is an internal matter.

India and Pakistan claim Kashmir in full but govern it in part. The nuclear-armed neighbours have fought two of their three wars over the disputed territory.