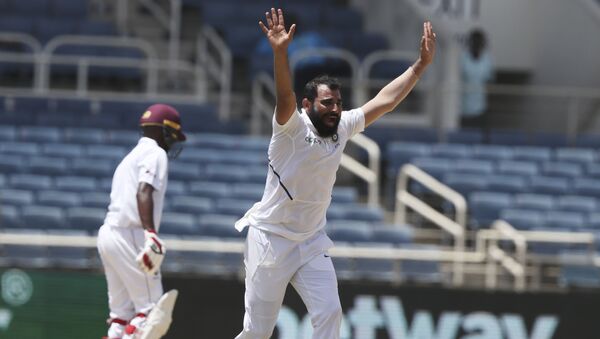 New Delhi (Sputnik): Furore has erupted on Twitter over an Indian court issuing a warrant against national cricket star Mohammed Shami in a domestic violence case filed by his wife.

Shami, a part of India’s victorious bilateral campaign against the West Indies is presently with the national team in the Caribbean. On Monday, the Alipore court in India’s Kolkata issued an arrest warrant against him in connection with a domestic violence case. The fast bowler has been granted 15 days to surrender before the court and apply for bail.

In 2018, Shami’s actress-model wife Hasin Jahan had accused him and his elder brother of domestic violence and assault. The duo was subsequently booked on Jahan’s complaint under the relevant sections of the Indian Penal Code by Kolkata police.

Prior to the police complaint, Jahan had also shared screenshots of her husband’s alleged affair on social media. Soon after, she went public with her domestic violence and adultery allegations against Shami and lampooned him several times in the media.

Many cricket fans however, were shocked with the development and backed the star Indian pacer to come out clean in the case. A section of the Twitterati slammed Jahan, accusing her of seeking public attention and falsely accusing her husband to extort money.

Whole #India is standing with @MdShami11.All know case against him is fake. Time has come to send those wives to jail who make fake allegations.https://t.co/2pkgJ6GWyN

What a complete test best performance by shami, getting crucial 3 wicket in last inning , he gives his 100 and 10 % but hasin jahan continuing try to destroy his career, it's time to support shami stand with this superstar fast bowler #MohammedShami @MdShami11 @BCCI @ICC pic.twitter.com/LxIDop8RAI

#MohammedShami
I support @MdShami11
He is playing Test cricket in WI n our court has issued arrest warrant
His wife jus wnt to torture him so tht he gives up n settle by giving huge alimony
Every #FakeCases ends up by moneyextortion@narendramodi @rsprasadhttps://t.co/OylvGxgYNl

I hope the judgment came out on true facts basis.
Otherwise some wicked women are using the law just to satisfy their self conceit...

A section of netizens though, said that the law should take its due course. They opined that cricket fans should not pick sides in the case and Shami should be punished if proven guilty.

VERY HAPPY FINALLY SOME MOVEMENT IN THE CASE. 👌👌@MdShami11 May the justice win. My prayers are with his wife. 🙏

If he is guilty , throw him out of team and take action else this periodic torture on him shud stop ..

Earlier in April 2019, Jahan was taken into custody by police after she reached Shami’s paternal residence in Amroha, Uttar Pradesh and created a scene. She was later released on bail.

Shami, who is one of India's most celebrated pacers, played a pivotal role in team India’s recent World Cup campaign in England. The speedster who has a tally of 131 wickets from 70 One Day Internationals (ODIs) also reached the landmark of taking 150 test match wickets in the recently concluded series against the West Indies.