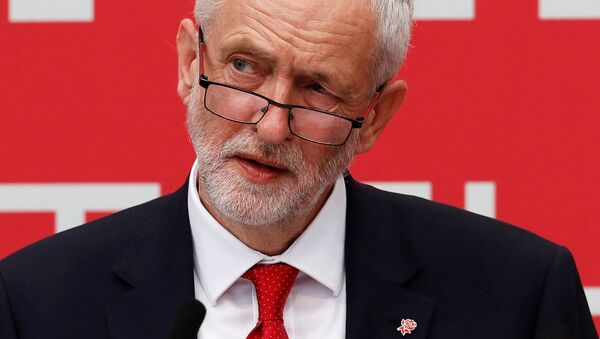 When UK Prime Minister Boris Johnson’s one-MP majority in Parliament failed in dramatic fashion Tuesday, he announced a snap election for October 14 - just two weeks before Brexit. Labour could win big if it reins in its anti-Jeremy Corbyn wing, whose posturing plays into Johnson’s agenda.

Following a close vote Tuesday, the British House of Commons decided to devote legislative time Wednesday toward passing a Brexit deal or postponing Brexit if they cannot. Johnson has promised Britain will leave the European Union on October 31, deal or no deal. However, as Labour moves to extend the Brexit deadline, Johnson has called a snap election for just two weeks before London’s departure.

Johnson has moved to suspend the legislature from September 10 until October 14, threatening that any Conservative MPs who vote against the measure won’t receive the party’s support in the next election.

“The context for today is that we have a government that is trying to use all of its powers that it can in order to force through a No-Deal Brexit, because it has to do that, because of the future of the Conservative Party depends upon it,” James Wright, a journalist with The Canary, told Radio Sputnik’s By Any Means Necessary Tuesday.

“I mean, Boris Johnson is not actually some kind of arch-Brexiteer; up until the referendum in 2016 he was supporting ‘Remain,’” Wright said, noting that Johnson only switched to “Leave” because it would be “better for his career prospects.”

In addition to trying to prorogate, or suspend, Parliament, Wright noted the government was trying to withhold royal assent, a consequence of the British commonwealth’s unique “queen-in-parliament” system that is typically considered a formality, but remains a power the crown possesses enabling it to ignore laws passed by Parliament.

“Whether they can politically get away with that is another question,” Wright told hosts Eugene Puryear and Sean Blackmon.

However, now the House of Commons is seeking an extension of the Brexit deadline past October 31 by invoking Article 50, which would postpone Brexit by three months, until January 31.

“When it comes to a general election, what matters is really what Labour is going to do,” he said, noting that Corbyn, the Labour Party leader, is “a genuine progressive. There’s lots of parallels between him and Bernie Sanders in the US, in terms of the policies that they both support, but the centrist and right wing, which is also parallel to the Democratic establishment, don’t actually want Jeremy Corbyn to win a general election - they want to stop Brexit, but they don’t want him to win.”

“So what they’re essentially doing, they are kind of concern trolling and being like, ‘Oh, Boris Johnson is trying to trap Jeremy Corbyn into a general election and is going to try and use that to win the election and bring in No-Deal.’ But when you look at it closer, the only way to stop No-Deal is for Jeremy Corbyn to win, because even if they brought in legislation to stop No-Deal before there was an election - if Johnson won the election, he could repeal it,” Wright said, noting nonetheless that Corbyn becoming head of government was “the most likely outcome.”

“What options does Boris Johnson have? If No-Deal is outlawed, he can’t do No-Deal … he can’t do a deal, because he cannot solve the problem of the Irish border,” Wright noted. The question of whether or not a “hard” border, with customs checkpoints, should separate the UK’s Northern Ireland from the Republic of Ireland, or whether the customs border should be moved to the Irish Sea and fiercely anti-Dublin Northern Irish Protestants should be treated as effectively part of Catholic Ireland, has paralyzed the British government almost since the June 2016 referendum that set Brexit in motion.

The latter solution has proven intolerable to the Democratic Unionists (DUP), a Belfast-based party that has provided 10 MPs to the Conservative government necessary for maintaining its hold on power, and Dublin, which opposes a hard border with Northern Ireland and which holds veto power over the deal, would veto it even if the DUP didn’t, Wright noted.

“The way that Boris Johnson would win is if Labour allows the centrists to control the debate … similarly to how Donald Trump could win in the US, is if they put up a centrist agenda … and end up defending the status quo against Boris Johnson, who’s been appearing to be some kind of anti-establishment, No-Deal person.”

“So if Jeremy Corbyn and Labour allow that to be the framing, they could well be in trouble. But, if they try and get Brexit off the table and present their agenda of anti-austerity, investment, free health care, free education for life, university, social housing for everyone, rebuilding Britain, [inaudible], then they will definitely win in my view,” he said.