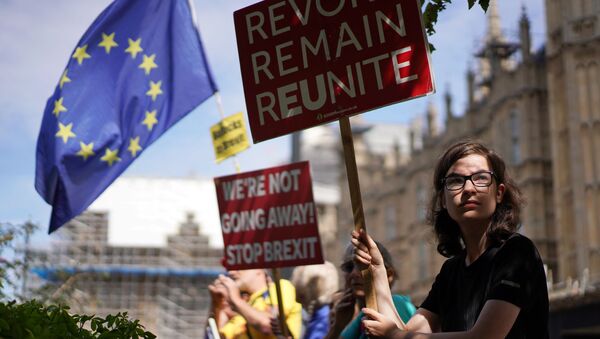 Prime Minister Boris Johnson emphasised on Monday that “under no circumstances” would he ask the European Union to delay the UK’s withdrawal and reaffirmed his commitment to finalise the divorce by 31 October. He has, however, faced cross-party opposition, which prompted him to threaten to call a general election for 14 October. Dr Lee Jones, a senior lecturer in international politics and co-founder of The Full Brexit, believes that it’s very likely that the PM will follow through on his warning.

Sputnik: After Boris Johnson's statement, do you think an early general election is inevitable?

Dr Lee Jones: A general election now seems very likely indeed. The government has stated that it will push for an election on 14 October if it is defeated in Parliament this week on Brexit – that is if parliamentary Remainers pass a bill that effectively outlaws a no-deal Brexit.

The government currently has a working majority of just one. Given that up to 30 Conservative MPs are opposed to no deal, it is therefore highly likely that the government will be defeated. Then, because the Labour Party is currently demanding a general election, it looks likely that the two-thirds majority necessary to trigger an election under the Fixed Terms Parliament Act would be achieved.

Sputnik: It’s been reported that if some Conservative MPs support opposition efforts to delay Brexit they will automatically lose the whip and won’t be able to stand again. Could this decision affect some potentially rebellious MPs?

Dr Lee Jones: I think some of those 30 anti-no-deal Conservatives could be sufficiently cowed by Johnson’s threat to deselect them that they will vote with the government or perhaps abstain. But, to reiterate, it will only take a small number of Tory MPs to rebel in order to pass the proposed anti-Brexit legislation.

A few pro-Brexit Labour MPs may side with the prime minister, so there would need to be more than a couple of Tory rebels. But a few have already declared that they do not wish to stand again anyway, and others are so opposed to Brexit that they will defy Johnson’s threat. Given that these MPs are prepared to engage in kamikaze tactics to block Brexit, Johnson’s threat is unlikely to be enough to defeat the Remainers.

Sputnik: How might an early election gamble look? Do you think the Conservative Party under Boris Johnson will be able to squeeze votes from the Brexit Party? How might a Remain coalition look?

Dr Lee Jones: An election at this stage is a big gamble, but the government has done everything it can to position itself shrewdly. The main electoral threat to the Conservatives is the insurgent Brexit Party, which hammered them in the European parliamentary elections and, to a large extent, caused the bulk of the parliamentary party to rally behind Boris Johnson and his intransigent position on honouring the Brexit vote.

Holding an election before Brexit is implemented is therefore risky because the Brexit Party could split the pro-Brexit vote in many constituencies, causing the Tories to lose. However, since becoming leader, Johnson has essentially turned the Conservatives into the Brexit Party: they back no deal; they have issued a raft of populist spending announcements; and they are sharpening the political division between “the people” and Remainers in parliament.

Although many Leave voters may not entirely trust Johnson – for good reason – most are rallying behind him, and the Brexit Party’s poll numbers have slipped considerably.

Sputnik: There is also a possibility that the two parties could strike an electoral pact, with the Brexit Party agreeing to concentrate its fire on Remainer Labour MPs or any Tory Remainers who somehow manage to survive Johnson’s purge. However, there is no evidence that such a pact is being discussed at the moment.

Dr Lee Jones: In any case, we can predict with certainty that the Conservatives will run a “people versus Parliament” election campaign. They will claim – with ample grounds – that they have been forced into an election by Remainer intransigence, and that Remainers are trying to undermine British democracy. It will be an extremely ugly campaign period.

On the Remain side, it’s not clear that a “coalition” would actually emerge. Remainers have been fractious and disorganised throughout the Brexit process, only just managing to come together earlier this year to compel a delay to Brexit. In elections, they have not formed pacts and it doesn’t look like they would do so now. The Liberal Democrats – whose slogan is “Bollocks to Brexit” – seem to hate Jeremy Corbyn, the leader of the Labour Party, as much as Brexit, and won’t do anything to help him into Downing Street.

Sputnik: Could Jeremy commit his party to a second referendum? Do you think it would electorally benefit Labour Party?

Dr Lee Jones: The Labour Party is already committed to a second referendum in which they would campaign for Remain. Although Corbyn is yet to say this personally in a straightforward way, all of his shadow cabinet now gives this as the Labour position. This policy has been adopted for two reasons.

First, the right-wing of the Labour Party, comprised of left-liberal Remainers, has been fighting tooth and nail for this policy for years and has now essentially taken back control of party policy on Brexit. Second, in the European Parliament elections, the LibDems’ stridently anti-Brexit position allowed them to eat into Labour’s middle-class base – the base of the left-liberal Remainer faction. This was the trigger for them to push for a shift in policy towards a second referendum.

While this might help shore up Labour’s vote in Remain-voting metropolitan areas, overall it will be electorally disastrous. Over four million Labour supporters voted to Leave; they rightly feel betrayed and it’s unclear how many would turn out to support Labour again. More importantly, Labour’s path to a majority lies through Leave-voting constituencies currently held by Conservative MPs on small majorities. There is now very little chance that they can capture these seats and therefore only a tiny chance that they can form a majority.

Because of this, Labour will try to make the election about everything except Brexit. They will try not to talk about the most pressing issue in British politics and instead emphasise their plans for social and economic reform. This worked for them in 2017, but it’s unlikely that the public will accept any attempt to fudge this issue in the present crisis.

Sputnik: What would happen if MPs are able to pass anti-no-deal legislation, but Boris Johnson refuses to sign it into law? Could it lead to a bitter fight between the legislative and executive branches of the state?

Dr Lee Jones: Technically, Boris Johnson has to present the bill to the Queen for royal assent; it’s her signature that’s required to turn it into an Act of Parliament. If he refused to pass the bill to her, this would be unprecedented – and probably unconstitutional as well as illegitimate. I imagine there would be large-scale protests and challenges in the courts. I’m not convinced that Johnson would go down this very dangerous route. It’s more likely that he would allow the bill to pass into law, but call a snap election with the hope of winning an election, repealing the bill, and proceeding with Brexit.