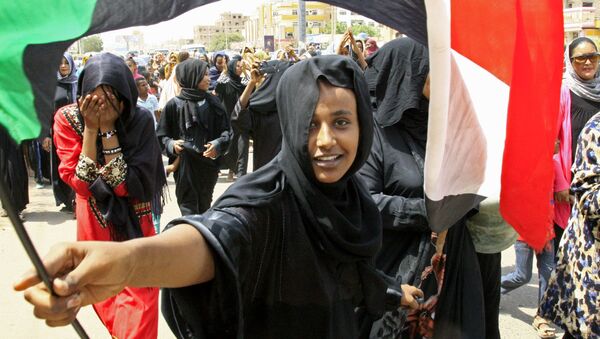 MOSCOW (Sputnik) - Asma Mahmoud Mohamed Taha, the secretary-general of the Sudanese Republican Party, who was detained last February in a wave of protests that eventually lead to the collapse of Omar Bashir's government, may soon be announced as a new minister of foreign affairs, a diplomatic source stated.

"Her name is Asma Mohamed. She will be the first lady to take this post, because never we had a lady as a foreign minister. She would be announced anytime as foreign minister", the source said.

Last week, a special committee of the Forces of Freedom and Change — a coalition of several political forces — has selected its candidates for the government of new Prime Minister Abdalla Hamdok. The list of candidates was submitted to the forces’ leadership for approval.

Moreover, on 21 August, Abdel Fattah Burhan, the head of the Transitional Military Council (TMC), was sworn in as the head of the Sovereign Council, which will replace the military-led organisation. Nine other candidates, representing both the military and the opposition, have been sworn in as members of the new council, which will govern the country in the run-up to the next elections.

According to the constitutional declaration, which will be Sudan’s main law for the three-year transition period, the Sovereign Council will comprise five members of the military and five civilian representatives, while one more member will be elected by the public.

A military official will head the council for the first 21 months, while a civilian official will lead the organisation for the rest 18 months.

The TMC came to power after April’s military overthrow of President Omar Bashir, which followed months of anti-government protests. However, the overthrow did not help end the demonstrations, during which the opposition forces called for the transfer of power to a civilian government.

In mid-July, the TMC and the opposition reached a power-sharing deal.