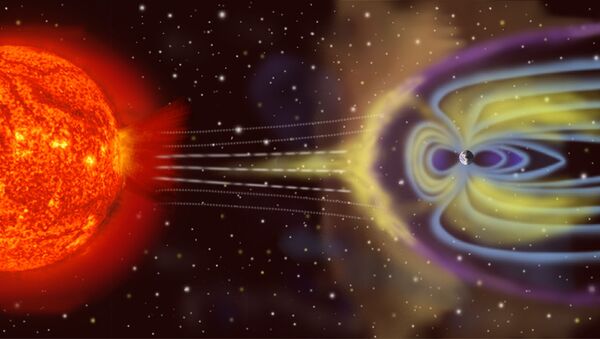 A solar wind stream blowing as fast as 800 km/s hit our planet's magnetic field over the weekend, triggering the second most powerful geomagnetic storm in 2019.

This year's second most powerful geomagnetic storm was recorded through Sunday and Monday, scientists at the Solar X-ray Astronomy Laboratory at the Lebedev Physical Institute (LPI) of the Russian Academy of Science said on their website.

The ongoing increase in magnetic disturbances was predicted in advance in connection with the approach of a high-speed solar-wind stream to the Earth. However, it came as a surprise that the storm, which was expected no earlier than Sunday, hit our planet on Saturday.

According to the lab, the Earth entered the stream of high-speed solar wind earlier than forecast - in the evening of 30 August, with the wind speed also exceeding that of the prediction; from the initial level of about 400 km/s on Sunday morning, it has surged to 600 km/s, and then skyrocketed to 800 km/s.

The scientists suggested that this may have contributed to the storm reaching level two, known as G-2, the second-lowest on the G1-G5 scale of geomagnetic storms.

The ongoing geomagnetic storm was the second most powerful this year: a larger event has been recorded over the past eight months only once - in May 2019, when that storm reached level G-3, reportedly affecting people's well-being. A maximum of five points is assigned to extremely strong geomagnetic storms.