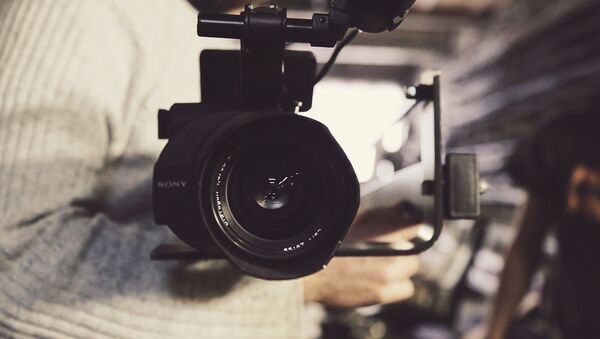 New Delhi (Sputnik): Huge furore has erupted on social media after a journalist in India, who recently filmed a video alleging poor quality of free meals being provided to students at a primary school, was booked for purportedly hatching a “criminal conspiracy”.

Indian journalist Pawan Jaiswal reported about the "apathy" of schoolchildren in the Indian state of Uttar Pradesh who allegedly had their government sponsored meals in the form of bread with salt instead of vegetables last month.

After he made his story public, state government authorities filed a case against him and Rajkumar Pal, a representative of the village head, under several sections of the Indian Penal Code, including charges of criminal conspiracy.

Police said the case was registered following a complaint by an education officer over the matter.

Jaiswal, meanwhile, took to social media to highlight his grievance, prompting various Indian journalists to come forward in his support. He said he visited the school upon learning about the meal providing scheme, adding that he kept an education officer in the loop about his visit there.

"After shooting the first video at around 12 pm, I called local reporters who spoke to the district magistrate. He went there and conducted an inquiry and suspended people”.

The journalist further claimed that the case had been filed against him "because questions were being asked from these official people. This is an attack on journalism. Everyone is welcome to verify the facts of the story".

This is Pawan Jaiswal , the #Mirzapur reporter who broke the roti + salt in mid day meal story. He has been booked by @mirzapurpolice for allegedly conspiring against the @UPGovt . In this video he reiterates he reported what he saw . @IndEditorsGuild please take cognizance ! pic.twitter.com/5mU47uufAo

Demanding a withdrawal of the charges levied against Jaiswal, various journalists across India have voiced their concerns over the matter.

Pawan Jaiswal has had an FIR slapped against him by @mirzapurpolice for doing his job and showing how kids were being fed roti with namak. This isnt merely ridiculous, its intimidation. Lets all speak up for this journalist. Not just for the media's sake, but for the children

Several netizens outraged by the news have also come out in support of Jaiswal by saying he was performing his duty as a journalist.

Stand with #PawanJaiswal
This is truly dark times. A case has been filed as a reaction to the image which showed the pathetic state of mid day meal in UP. Well it's not against the government or bureaucrats, but against the journalist who shot the picture.https://t.co/Jgh9SJrDlb

It's stupidity of the highest order, and even if this was a conspiracy (which I'm sure isn't), the mere fact that Salt & Roti were served (even once is unacceptable), should make the entire local machinery hang it's head in shame..@PMOIndia should intervene and stop this farce!

Others have, however, expressed suspicion over the report and slammed the accused journalist for peddling fake news.

Do the research work at ground level!
Find out the truth..
Story is totally different

Every presstitute who peddles FAKE news should be booked...

A video of students of the Siyur Primary School in the Mirzapur district being served bead and salt for their mid-day meal went viral in late August, sparking mass outrage and leading to the suspension of two teachers.