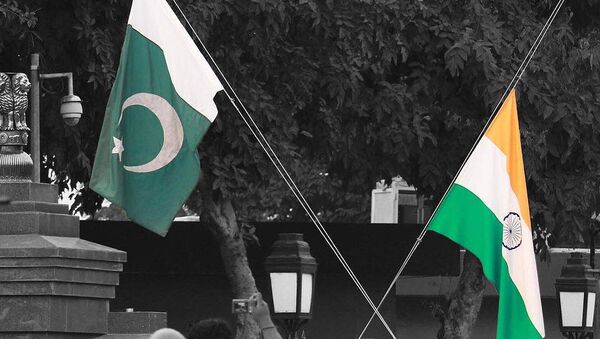 New Delhi (Sputnik): On Sunday, Pakistan Foreign Office Spokesperson Mohammad Faisal said Kulbhushan Jadhav, who was sentenced to death by a Pakistani military court, will get access on Monday "in line with the International Court of Justice judgement and state laws".

"Today, after victory in the International Court of Justice (ICJ), India will be proceeding for consular access to Kulbhushan Jadhav. India's Charge d' Affaires at the Indian mission Gaurav Ahluwalia will be meeting Jadhav at 12 noon for 2 hours", a government official said on Monday morning.

The official hoped that "Pakistan will ensure the right atmosphere so that the meeting is free, fair, meaningful and effective in keeping with the letter and spirit of the ICJ's orders".

On Sunday, Pakistan Foreign Office Spokesperson Mohammad Faisal said Jadhav will get access "in line with the ICJ judgement and state laws".

"Consular access for Indian spy Commander Kulbhushan Jadhav, a serving Indian naval officer and RAW operative, is being provided on Monday, 2 September 2019, in line with the Vienna Convention on Consular Relations, ICJ judgement and the laws of Pakistan", Faisal tweeted.

The surprise offer came against the backdrop of heightened tensions along the border that erupted after India abrogated the  special status to Jammu and Kashmir and bifurcated it into two Union Territories on 5 August.

Earlier on 2 August, the Indian government had turned down a Pakistani proposal to provide consular access to incarcerated former Indian naval officer Kulbhushan Jadhav as the proposal did not provide unconditional access to Jadhav.

On the 17th of July, the ICJ found Pakistan was "under obligation to cease internationally wrongful acts of a continuing character" for violating the 1963 Vienna Convention on Consular Relations.

The dispute over whether Pakistan would allow Indian officials to meet Jadhav to converse in private, lies in the interpretation of the Vienna Convention, as it does not clearly spell out the nature of meetings.

Paragraph 2 of Article 36 of the Vienna Convention says: "The rights referred to in paragraph 1 of this Article shall be exercised in conformity with the laws and regulations of the receiving State, subject to the proviso, however, that the said laws and regulations must enable full effect to be given to the purposes for which the rights accorded under this article are intended".

In December 2017, Pakistan had allowed the family of Jadhav to meet him in jail as a humanitarian gesture, but the meeting was not private.

Jadhav interacted with his mother and wife only through an intercom, with five Pakistani officials present, and no physical contact allowed. The Indian Foreign Ministry had accused Pakistan of harassing Jadhav's wife and mother during the meeting.