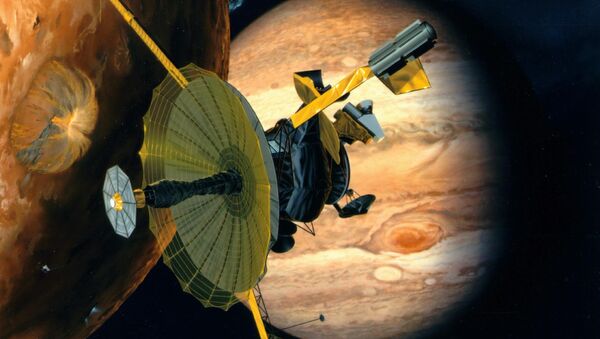 © AFP 2023 / NASA
Subscribe
International
India
Africa
The researchers note that they haven’t yet confirmed the presence of the exomoon but rather obtained “circumstantial evidence” pointing to its presence.

Scientists studying the mysteries of deep space have recently made a sizzling hot (literally) discovery in the Lepus constellation where an international team of researchers led by the University of Bern discovered evidence of a volcanically active moon in the WASP-49b exoplanet system which is located approximately 550 light years away from Earth.

According to a statement posted on the University of Bern’s website, the team is yet to confirm the existence of this new exomoon, which "would appear to be an extreme version of Jupiter’s moon Io."

"It would be a dangerous volcanic world with a molten surface of lava, a lunar version of close-in Super Earths like 55 Cancri-e", said Apurva Oza, postdoctoral fellow at the university’s Physics Institute and lead author of the study, describing the celestial body as “a place where Jedis go to die, perilously familiar to Anakin Skywalker" – an apparent reference to the planet Mustafar featured in "Star Wars: Episode III – Revenge of the Sith."

The researchers base their hypothesis on "circumstantial evidence" such as the presence of sodium gas at an "anomalously high-altitude" at the WASP 49-b, as the team’s previous observations of Jupiter and Io, coupled with mass loss calculations, suggest that an "exo-Io" may be a plausible source of sodium.

"The neutral sodium gas is so far away from the planet that it is unlikely to be emitted solely by a planetary wind," Oza remarked. "The sodium is right where it should be".

He also admitted that the team now needs to “find more clues” because the data obtained so far might have other explanations, such as some non-thermal process or perhaps a ring of ionized gas surrounding the exoplanet.