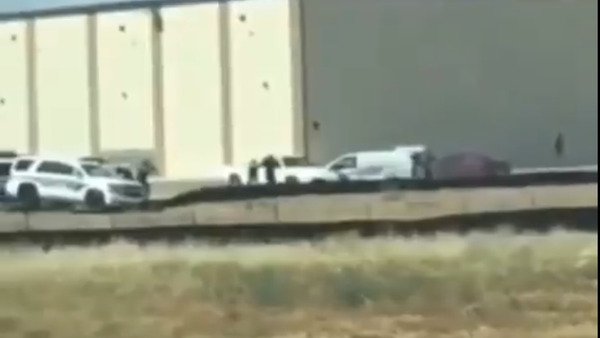 On Saturday a man shot police officers and fled, continuing to shoot random motorists. The shooter reached the Texas town of Odessa where he caused additional casualties before the police gunned the man down.

At about 4 p.m. Saturday, a Texas Department of Public Safety officer pulled a gold Honda over in a routine traffic stop on Interstate 20, connecting the Texas towns of Midland and Odessa.

The driver then started shooting at the officers and at motorists passing on the highway, Odessa Police Chief Mike Gerke said at a news conference.

SHOCKING and scary video of the #Odessa shooting.

Children taking cover while shots can be heard in the background.

​​​The man fled the scene in his Honda and traveled towards Odessa, where “there were multiple victims” as he continued to shoot. At some point he hijacked a US Postal Service van and kept shooting until, while approaching a Cinergy movie theater, he was gunned down by police in a shootout.

Can you imagine watching a movie at the theater and then running for your life because someone came in and started shooting random people. Absolutely insane world we live in. #Odessa Texas #Activeshooter pic.twitter.com/AyuNrNsypb

Early reports indicated there could have been two shooters moving in two separate vehicles – the Honda and the truck. Later, it became clear that only one man was doing the shooting.

Gerke described the suspect as a middle-aged white man in his mid-30s. Police have not released his name or motive.

Police also declined to comment on what weapon he used. According to a Texas Department of Public Safety Facebook post, the shooter was armed with an unidentified rifle.

At least five people were killed and 21 injured, including three police officers. According to CBS 7,  fourteen people are reportedly being treated at the Medical Center Hospital in Odessa. At least one victim died in the hospital. Two victims reportedly were treated and released, seven remain in critical condition, two in serious. At least one shooting victim was a child under the age of 2.

US President Donald Trump confirmed he had been told about the situation by Attorney General William Barr, adding that “FBI and Law Enforcement is fully engaged.” The president made no statement on the shooting at the time of publication.

"Our hearts go out to all the victims and families who had loved ones lose their lives,” said Vice President Mike Pence before departing to Poland.

Texas Governor Gregg Abbott issued a statement on the shooting saying he is “heartbroken” over the incident.

“The first lady and I are heartbroken over this senseless and cowardly attack, and we offer our unwavering support to the victims, their families, and all the people of Midland and Odessa,” he said.

Democratic presidential candidates and lawmakers reacted to the shooting, renewing calls for action against gun violence.

"We do know that this is f-cked up. We know that this has to stop in our country," former Texas Representative Beto O'Rourke said at a campaign stop, and later tweeted similar content.

​"I’m heartbroken, sickened, & angry. Weeks after the horror in El Paso, another community in Texas has been terrorized by gun violence. Enough. We must end this epidemic. @DrBiden & I send our thoughts to those affected & thank our law enforcement who responded at great risk," former Vice President Joe Biden tweeted.

I’m heartbroken, sickened, & angry. Weeks after the horror in El Paso, another community in Texas has been terrorized by gun violence. Enough. We must end this epidemic.@DrBiden & I send our thoughts to those affected & thank our law enforcement who responded at great risk.

"I’m sick of this. America is sick of this," Senator Kamala Harris tweeted. "We need to act."

Keeping the Midland and Odessa community and the victims in my thoughts and prayers. Grateful to first responders who ran into harm's way.

We need to act.

​Other Dems who spoke on the shooting were Presidential Candidates Andrew Yang, John Delaney and Steve Bullock; and Senator Anthony Booker.