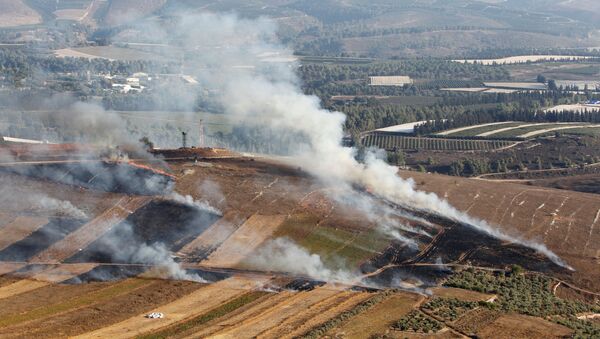 BEIRUT (Sputnik) - Lebanese Prime Minister Saad Hariri asked on Sunday in phone talks with US State Secretary Mike Pompeo and French Presidential Adviser Emmanuel Bonne for the two nations to intervene after the escalations on the Lebanese-Israeli border.

"Prime Minister Saad Hariri held phone talks with US Secretary of State Mike Pompeo and French Presidential Adviser Emmanuel Bonne, demanding the intervention of the United States, France and the international community to counter the escalation of the situation on the southern border," the government's statement said.

Earlier in the day, Israeli drones dropped flammables on a Lebanese grove near the border with Israel in an anti-Hezbollah operation, triggering forest fires. In response, several anti-tank missiles were fired from Lebanon to target facilities in northern Israel, which in its turn fired some 100 projectiles on Lebanon's southern settlements.

Lebanon accused Israel of being behind a drone strike on the office of the Hezbollah militant group near Beirut last Sunday, which was followed by another attack on Palestinian military positions in eastern Lebanon.

Lebanon has repeatedly objected to Israeli anti-Hezbollah operations in its airspace, insisting that they violate the country's sovereignty and UN Security Council Resolution 1701. Israel, in turn, considers Iran- and Lebanon-based Hezbollah its key rival in the region and conducts regular air raids against it.