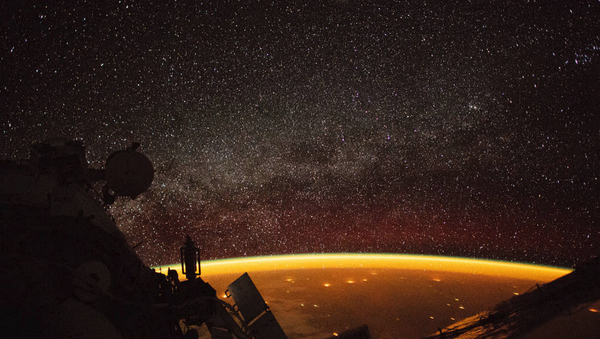 © Courtesy of NASA
Subscribe
The creators of the space hotel will offer luxury cruise-liner levels of comfort, artificial gravity, earthly cuisine and hot showers. And they say they can have it up and running a mere six years from today.

A company named Gateway Foundation unveiled its design for a “space hotel” they say will be operational by 2025. Named “The Von Braun Space Station,” the hotel is a ring-shaped structure similar to countless sci-fi movies, books and TV shows.

The station design is based on 24 residential modules, which will reportedly accommodate up to 400 space tourists at a time. The promotional branding team for the space hotel believes the destination could accept 100 new visitors every week.

“Eventually, going to space will just be another option people will pick for their vacation, just like going on a cruise, or going to Disney World,” team designer Tim Alatorre, said, according to Dezeen. “The goal of the Gateway Foundation is to have the Von Braun operational by 2025 with 100 tourists visiting the station per week.”

The first thing that comes to mind when one hears about tourism in orbit are the exorbitant prices. Between 2001-2009, the price for a flight aboard a Russian Soyuz spacecraft was in the range of $200-250 million. While Gateway admits that living in their hotel will be beyond expensive at first, they also believe the price could be reduced over time.

​“Because the overall costs are still so high, most people assume that space tourism will only be available to the super rich, and while I think this will be true for the next several years, the Gateway Foundation has a goal of making space travel open to everyone.”

According to Alatorre, the space hotel will not only provide artificial gravity, thanks to induced spin, but also feature cozy interiors of natural materials, as well as cinemas, bars and fully-staffed kitchens.

​“Developments in material science now allow for lightweight, easily cleanable natural material substitutes for stone and wood that would normally not be feasible to bring into orbit,” Alatorre said. “The use of fabrics, warm-coloured lighting and paints, and materials with texture, all help us to connect and feel at home. Because the station will have gravity there will be a sense of direction and orientation that isn't present in the ISS.”

A daring target, but there’s a catch: the station, including its numerous showers, will use “recycled water,” the promoters say. Currently, the ISS crew relies on recycled water extracted from human sweat, shower drainage (grey water) and urine. If the Von Braun Station will feature anything similar to ISS recycling technology, it will be a tough sell to get the world’s super-rich on board.

But the company does not plan to stop there, as they see the Von Braun station as a proof-of-concept for a much bigger structure they call The Gateway, intended to house 1,400 people, doubling as a transit station for large ships to take people to Mars or elsewhere.