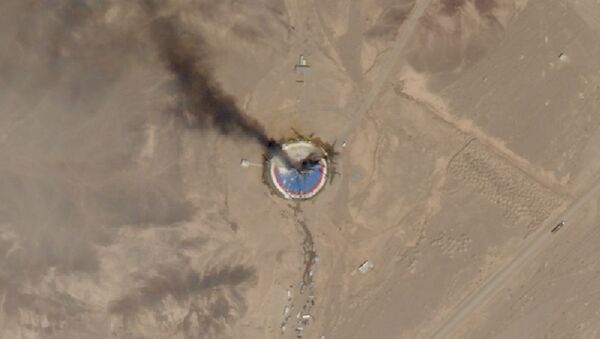 © Photo : Planet Labs Inc. via Middlebury Institute of International Studies
Subscribe
An image of a failed Iranian launch tweeted by the US President set experts and netizens on their toes, as the high resolution of the photo cannot be achieved with known satellite technology.

In a tweet posted Friday, US President Donald Trump posted a highly-detailed aerial photo of Iran’s Semnan Space Center Launch Site One, damaged and charred after an explosion which supposedly happened during the fueling of a rocket.

“The United States of America was not involved in the catastrophic accident during final launch preparations for the Safir SLV Launch at Semnan Launch Site One in Iran. I wish Iran best wishes and good luck in determining what happened at Site One,” Trump tweeted, accompanied by the photo.

​However, it was the photo that attracted the attention of viewers, as the launch site is depicted in uncommonly high resolution.

"I've never seen anything like this before," said David Schmerler, a leading expert on open-source imagery analysis, according to Business Insider. "I know that [the US military has] amazing capabilities, but I don't know what this is."

Ankit Panda, an adjunct senior fellow at the Federation of American Scientists who specializes in analyzing satellite images, says the photo could only have been taken by a highly-classified military satellite. According to Panda, no commercial satellite he knows of is capable of such high resolution. The WorldView-2 satellite, produced by Maxar, can only provide a 46-centimeter resolution, a National Public Radio report says.

I remember from my time In govt, the rigorous processes we went through when declassifying intelligence to ensure we didn’t burn any sources or methods.

But I guess we can replace that process with taking a picture and tweeting it 🤔🤔 https://t.co/6enWkVuV3F

​"The resolution is amazingly high," says Panda. "I would think it's probably below well below 20 centimeters, which is much higher than anything I've ever seen."

Others, however, say that satellites have limitations, and suggest that the photo was taken from a drone.

"The atmosphere is thick enough that after somewhere around 11 to 9 centimeters, things get wonky," says Melissa Hanham, deputy director of the Open Nuclear Network at the One Earth Foundation.

Is this the first time the (or a) president has tweeted out near-raw intelligence? https://t.co/hzTR9nw86l

​But if it was a drone, this means either the US regularly violates Iranian airspace to spy or it has a drone so advanced it can fly well above national airspace. While the former revelation is likely to cause a political-military scandal, the latter means Trump just revealed another piece of highly-advanced and classified technology.

"These are closely held national secrets," Panda told National Public Radio. "We don't even share a lot of this kind of imagery with our closest allies."

He explained that the tweet revealed to Tehran a specific US military capability that can now be counteracted. "The Russians and the Chinese, you're letting them know that these are the kind of things that the United States has the capability of seeing," he says.

…. whose shadow am I seeing in this obvious phone picture? https://t.co/PImqHyHiiP

​A US intelligence official confirmed to CNBC on Friday that Trump’s tweet image comes from a classified intelligence briefing he received early in the day. The tweet sparked a storm of jokes about how Trump superseded the long and complicated bureaucratic process of declassifying intelligence by means of a simple phone-camera snap of the briefing (one can clearly see the phone flash on the photo). In the meantime, others engaged in online attempts to decipher what, when and where could have taken the photo.

Let's assume the photo was taken yesterday, I'd say — based on the direction of the shadows — that the image was taken roughly between 13:30 and 14:30 UTC. (I'm not aware of any known sats having this kind of optical capability, so it doesn't bring us much further.) pic.twitter.com/twA1OVHLLY

​Later on Friday, Trump defended his move, saying he had the “absolute right” to share the photo.

"I just wish Iran well. They had a big problem. And we had a photo and I released it, which I have the absolute right to do. And we’ll see what happens," Trump said, according to The Hill.