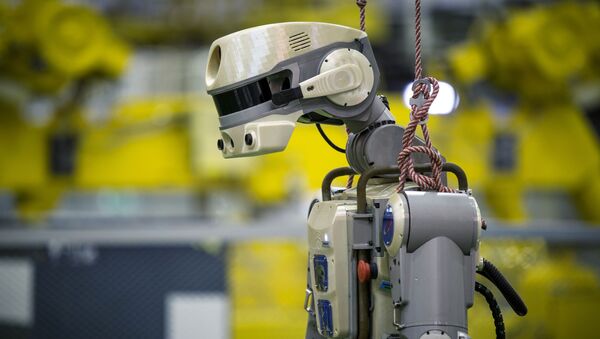 © КЦ "Южный" / ЦЭНКИ
/
Go to the photo bank
Subscribe
The humanoid robot’s trip to the International Space Station got off to a rocky start last week after the first attempt to dock at the station failed. A second attempt to dock proved successful on Tuesday, and the robot was able to board the Russian segment of the station.

Russia’s Skybot F-850, aka FEDOR (Final Experimental Demonstration Object Research) has taken to its official Twitter to complain about cosmonaut Alexei Ovchinin’s rough treatment of him, accusing the cosmonaut of threatening to use a hammer and spanner to get him to turn on.

“Today, during the startup of my operating system, cosmonaut Alexei Nikolayevich Ovchinin suggested using a hammer and a spanner. I had to initiate autostart procedure to avoid any further problems in the dialogue with Alexei Nikolayevich,” FEDOR’s account wrote, attaching an image of Ovechkin and the robot inside the ISS.

Earlier, a frustrated Ovchinin joked with engineers at the Mission Control Center outside Moscow about hitting the robot with a hammer after efforts to turn the robot on proved troublesome.

Later, FEDOR’s account posted another tweet, saying he was now fully operational and getting along with Ovchinin, having begun training with him on operations simulating cable repairs to the outside of the station.

Tweet reads: “Good day! Here is a report on yesterday’s work. Cosmonaut Alexander Alexandrovich Skvortskov is controlling movement from another part of the station.”

Tweet reads: “Here I am working with various tools.”

FEDOR’s launch to the ISS got off to a difficult start last Saturday after the Soyuz MS-14 spacecraft carrying him failed to dock with the ISS due to a docking module fault, retreating to a safe distance from the space station before making a second, successful attempt to dock on Tuesday.

During his time aboard the ISS, FEDOR is expected to carry out a series of experiments meant to assist Russian cosmonauts. He will return to Earth next month when the experiments are completed. If tests prove successful, the next generation of FEDOR robots will be tested in open space.

The humanoid robot, whose construction includes elements of artificial intelligence, was officially renamed Skybot F-850 last month ahead of its first flight. In addition to various preprogrammed tasks, the robot is capable of operating in ‘avatar’ mode, in full remote control of an operator.