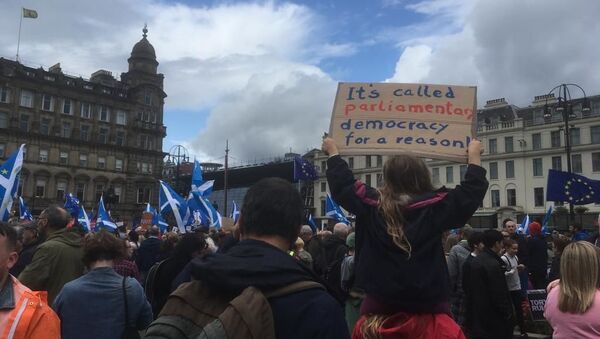 Earlier this week, UK Prime Minister Boris Johnson asked the Queen to prorogue parliament until 14 October, and she approved the order. Johnson said the Queen will deliver a speech on the day when the parliament's shutdown is over to outline a 'bold and ambitious' post-Brexit domestic agenda.

Crowds have gathered in George Square, Glasgow, Scotland, to protest against Boris Johnson's decision to suspend the parliament.

Hundreds of thousands of people have been taking part in a similar protest in London.

On 28 August, Johnson announced his decision to prorogue the parliament for a month, saying that the previous session lasted for 340 days and should be brought to a close. After his order was approved by the Queen on the same day, Johnson said a new post-Brexit domestic agenda will be set out by Her Majesty on 14 October.