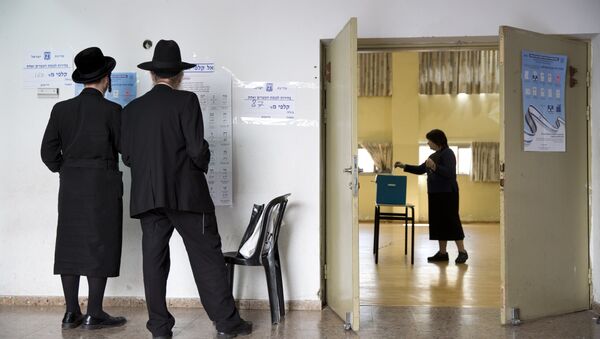 Israel is preparing for its second national election this year, after Benjamin Netanyahu’s failure to form a coalition government in May prompted the dissolution of parliament – and Jewish Orthodox parties are expected to win a small number of seats.

A group of would-be Israeli legislators have committed to promote the establishment of Jewish settlements in Palestinian territories and not to give Palestinians an independent state.

Ayelet Shaked, head of the conservative New Right party, and over a dozen of fellow party members vying for Knesset seats in the 17 September legislative election, declared their intentions in a letter to leaders of the Chabad Hasidic movement, one of the largest Jewish religious organisations in the world.

As quoted by Breaking Israel News, the politicians pledged to “work in the Knesset and in every other framework towards a complete Israel as per the holy opinion of the revered Rebbe of Lubavitch”.

This refers to Rabbi Menachem Mendel Schneerson, the late leader of the Chabad movement who died in 1994. Schneerson had spread the word about the coming of the messiah of the Jewish people, which he said could be drawn nearer if Jews practiced traditional teachings. The rabbi also rejected peace accords with the Palestinians and long maintained that Israel should not give back “one inch” of its territory.

“We will also firmly oppose the above-mentioned topics in negotiations or in any other framework. For this is indeed a matter of life or death. We will work towards establishing more Jewish communities in all areas of Judea and Samaria (the common Israeli term for West Bank) as well as every other part of Israel,” the New Right members added.

They said they would be acting “in anticipation of the true redemption and its complete and immediate fulfilment”, apparently referring to the coming of the promised messiah.

Ayelet Shaked is leading the joint ticket with two Orthodox Jewish parties Jewish Home and Tkuma in the upcoming election, both of which are running on a nationalist and religious platform.

Recent polls show the bloc could win around 10 seats in the 120-seat parliament; Prime Minister Benjamin Netanyahu’s Likud is in the lead with 32 projected seats with the Blue and White alliance polling at 30 seats.

The Knesset voted to dissolve itself in May and called a snap vote just one month after the legislative election, which saw Netanyahu fail to secure a majority coalition and form a government. The New Right party failed to pass the 3.25-percent electoral threshold in April and therefore gained no seats in that election.