From ‘King of the World’ to King of Stage: Boris Johnson’s Many Career Choices Revealed 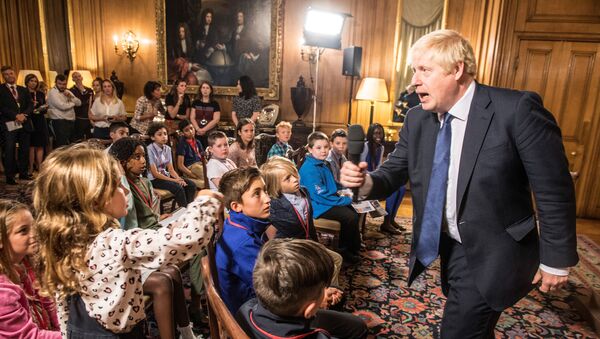 Britain’s newest prime minister, Boris Johnson worked as a journalist and an editor before carving out a career in politics. His latest revelations demonstrate that he considered more diverse career paths.

Boris Johnson has acknowledged once having aspired to become a musician and a kitchen tile designer before setting out on the long road to the nation’s highest office.

During Friday’s Q&A session with children from school newspapers at 10 Downing Street, Johnson was asked whether he'd always had the ambition of becoming prime minister.

“I had various ambitions,” he replied. “I briefly thought that I could be a musician, a rock star, but that didn’t get very far.” Responding to a later question, he said he had learned the opening chords to Deep Purple’s Smoke On The Water.

Disillusioned with his rock star ambitions, Johnson turned to the idea of becoming a supermarket tycoon. It didn’t bring him success either, and he then decided to make kitchen tiles – a plan he described as a “total flop”.

"I wanted to make kitchen tiles"

“It goes to show you've got to try a lot of things first,” the prime minister concluded.

Political documentary-maker Michael Cockerell, who has recently made a biographical profile of Boris Johnson, said in May that the head of government had even more far-reaching ambitions as a child.

He said: “When he was five, he told his sister Rachael that what he wanted to be in life was to be world king — he thought there was a position where you were king of the world.”

Johnson was also asked during the session whether security guards follow him every day.

“They do, it’s absolutely true, they do,” he replied. “I have to say, when I was foreign secretary I did manage to evade them a few times, but I perhaps shouldn’t go into that.”

Addressing the kids’ questions, he also promised not to privatise the NHS and said the government “is looking to alleviate” the debt burden of university students.

Johnson has recently promised to pump an extra £14.4 billion ($17.5 bilion) into schools across England over the next three years.

He said the government won’t cut spending in other areas to deliver the plan, as there would be enough funds in the budget.

School leaders met the move with a guarded appraisal.

“We are pleased on behalf of schools and students that the government has listened to our repeated warnings about the scale and severity of the funding crisis,” said Geoff Barton, leader of the Association of School and College Leaders (ASCL), still pledging to study the figures in detail.

“After five years of disappointment on funding, I'm sure the prime minster would forgive us only giving this a cautious welcome,” noted Paul Whiteman, general secretary of the National Association of Head Teachers.

“We hope that this announcement is as good as it looks,” he added, warning that it would be “disastrous if the detail did not live up to the headline”.