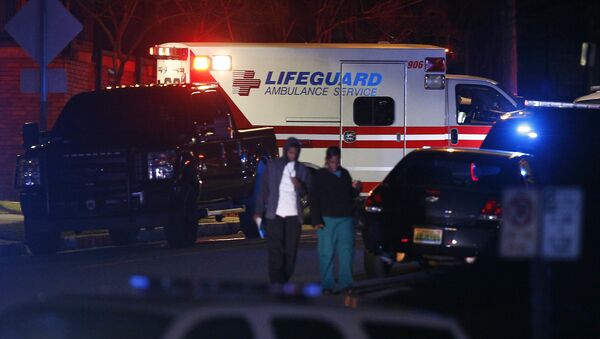 © AP Photo / Brynn Anderson
Subscribe
A woman caught in a flash flood in Arkansas drowned despite firefighter’s and dispatcher’s best efforts. Rescuers failed to secure the drowning car in time, but the cold treatment given to the doomed and weeping victim by the dispatcher turned the tragedy into a harrowing nightmare.

Debbie Stevens, 47, was on her regular paper route when she got caught in a sudden flash flood. Scared of the rapidly rising water, she called 911 but was given a cold shoulder by the dispatcher.

"Please help me, I don't want to die! I can't swim! I'm scared! I'm going to drown!", Stevens can be heard on the recording of a call that lasted 22 minutes. “I'm scared. I've never had anything happen to me like this before.”

The 911 dispatcher, Donna Reneau, working her final shift after giving her resignation notice two weeks earlier, was unsympathetic to the woman’s lament, and told her that authorities will “get there when they get there,” that she is not going to die and, at one point even telling her to “shut up.”

Donna Reneau, the 911 dispatcher from Fort Smith Arkansas, is hard to listen to, she was so cold and cruel to the dying woman. pic.twitter.com/1bktrJRehL

​​"You're not going to die," the dispatcher said in the audio file released by police. "I don't know why you're freaking out [...] You freaking out is doing nothing but losing your oxygen in there. So, calm down."

As the woman continued to cry uncontrollably, the dispatcher scolded her for driving into the water.

"Well this will teach you, next time don't drive in the water," Reneau can be heard saying to Stevens. "I don't see how you didn't see it, you had to go right over it, so."

At one point Stevens said she needed to vomit due to stress.

"Well, you're in water, you can throw up," the dispatcher said. "It's not going to matter."

Crying uncontrollably, Stevens asked the woman on the line to pray with her.

"You go ahead and start off the prayer," the 911 operator said.

Fifteen minutes into the call, Reneau worked with firefighters in efforts to locate Stevens and her submerged SUV. The dispatcher can be heard asking a firefighter on the phone whether he could see Stevens' SUV. "Negative," he said.

"Miss Debbie, you're going to have to shut up," the dispatcher can be heard saying and asking Stevens to honk on her horn instead, so that the responders can locate her vehicle.

"My horn is dead," Stevens said. "Everything is dead."

Authorities responded to the scene 12 minutes after she dialed 911, Fox News reported Saturday, but because of the floodwaters it took over an hour to locate and reach Stevens' vehicle. By the time police and firefighters were able to secure the car, Stevens was dead.

Due to flash flooding, many were calling 911 that night. At one point, Reneau can be heard answering other callers’ calls, while keeping Stevens’ call active.

Fort Smith Interim Police Chief Danny Baker commented on the incident, saying Reneau's response was "calloused and uncaring at times", but insisted in comments to KHBS did nothing "criminally wrong" nor "violated [911] policy."

“Exacerbating response and rescue efforts were the facts that Mrs. Stevens was having trouble describing her exact location and flooding limited the ability of first responders to reach her,” the statement reads, adding that the officer on the scene did his best to enter the vehicle, but the speed and volume of the water prevented his attempts.

000000
Popular comments
All signs of a civilization descending into decline and selfishness.