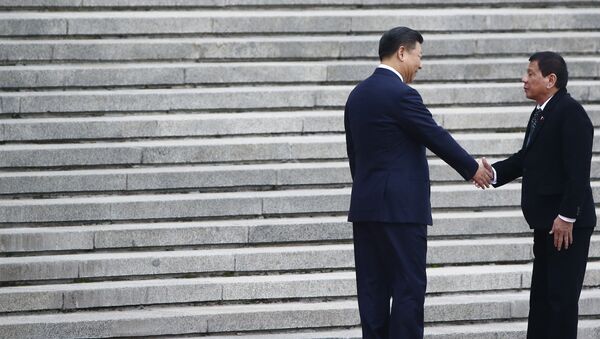 © AFP 2021 / THOMAS PETER
Subscribe
Xi Jinping met with Philippines’ President Rodrigo Duterte in Beijing on Thursday, with the five day visit being the fifth time Duterte has come to China since taking office in 2016.

Chinese President Xi Jinping has called on the Philippines to take a “bigger step” toward the joint development of offshore oil and gas resources, saying greater cooperation in this area would be possible if the two countries were to “put aside” their territorial dispute in the South China Sea, Xinhua has reported.

Speaking to Duterte on Thursday, Xi said increased cooperation would “not only benefit the two countries and their peoples, but will also add positive energy to regional peace and stability.”

According to Xi, the Chinese and Philippines’ economies could also take advantage of one another’s economic initiatives, including China’s Belt & Road Initiative and the Philippines’ ‘Build, Build, Build’ programme to develop new infrastructure, industrial, telecommunications and energy projects.

In a press conference on Friday, Duterte spokesman Salvador Panelo confirmed that the two leaders had brought up the South China Sea dispute, including the 2016 ruling by the Permanent Court of Arbitration in The Hague, which concluded that there was no legal basis for China’s historical claims over wide swathes of the body of water.

The dispute includes conflicting claims over Reed Bank, an 8,850 square km area of the South China Sea northeast of the Spratly Islands west of the Philippines where much of the region’s known oil and gas reserves are based, and where Chinese and Philippines vessels have clashed repeatedly over fishing rights. 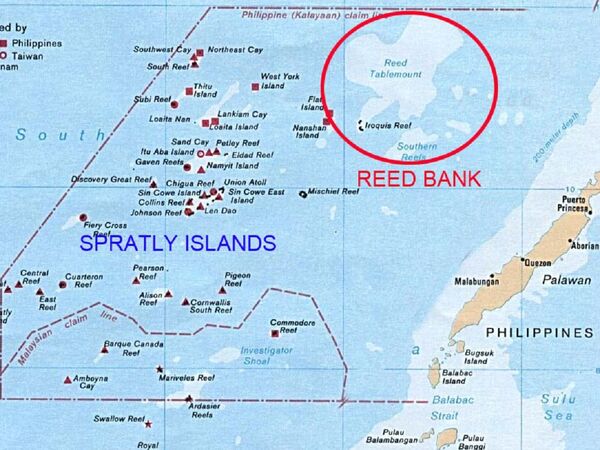 Location of Reed Bank in the South China Sea
CC BY 3.0 / Notthebestusername / Reedbank

Duterte raised the ruling “unequivocally, assertively but friendly” with Xi Panelo said, according to Reuters, with the Chinese leader reportedly responding that Beijing does not recognise The Hague’s recommendations. Nevertheless, the two sides recognised “the importance of self-restraint and respect for freedom of navigation in –and overflight above – the South China Sea,” he said.

“As long as the two sides handle the South China Sea issue properly, the atmosphere of bilateral ties will be sound, the foundation of the relationship will be stable, and regional peace and stability will have an important guarantee,” Xi said in his meeting with Duterte, adding that the issue should be dealt with without “external interference.”

Duterte has been criticised at home, including by his own vice president, for “selling out” to China amid the warming of relations under his tenure as president. Last month, Philippines Defence Secretary Delfin Lorenzana accused China of “bullying” smaller claimant states such as the Philippines in the South China Sea. Duterte has rejected such criticism, saying any conflict in the South China Sea could spark a major war with China in which the Philippines’ military would be “decimated.”

Along with China and the Philippines, Brunei, Malaysia, Vietnam and Taiwan also lay claim to part of the South China Sea. China controls the vast majority of the sea area, and has established military outposts and air bases in the region by building artificial islands. Over $5 trillion in maritime cargo, including much of China’s Middle Eastern oil supplies, pass through the South China Sea each year. The area is also extremely rich in fishing stocks and untapped energy resources.

000000
Popular comments
The US knows very well that,when Philippine and the Chinese government have a good relation and the 2 sides have an agree of exploring oil and gas,it will be a big lost for the US. That's why the US is trying it very best to destabilize the region so it ca have the upper hands and steal from the Philippines. Trust me if Duterte sign an agreement with Xi,he wont be disappointed because Xi will fulfill it part of the agreement.
PanCash
31 August 2019, 15:08 GMT1
000000
Newsfeed
0
New firstOld first
loader
LIVE
Заголовок открываемого материала
Access to the chat has been blocked for violating the rules . You will be able to participate again through:∞. If you do not agree with the blocking, please use the feedback form
The discussion is closed. You can participate in the discussion within 24 hours after the publication of the article.
To participate in the discussion
log in or register
loader
Chats
Заголовок открываемого материала
Worldwide
InternationalEnglishEnglishMundoEspañolSpanish
Europe
DeutschlandDeutschGermanFranceFrançaisFrenchΕλλάδαΕλληνικάGreekItaliaItalianoItalianČeská republikaČeštinaCzechPolskaPolskiPolishСрбиjаСрпскиSerbianLatvijaLatviešuLatvianLietuvaLietuviųLithuanianMoldovaMoldoveneascăMoldavianБеларусьБеларускiBelarusian
Transcaucasia
ԱրմենիաՀայերենArmenianАҧсныАҧсышәалаAbkhazХуссар ИрыстонИронауОssetianსაქართველოქართულიGeorgianAzərbaycanАzərbaycancaAzerbaijani
Middle East
Sputnik عربيArabicArabicTürkiyeTürkçeTurkishSputnik ایرانPersianPersianSputnik افغانستانDariDari
Central Asia
ҚазақстанҚазақ тіліKazakhКыргызстанКыргызчаKyrgyzOʻzbekistonЎзбекчаUzbekТоҷикистонТоҷикӣTajik
East & Southeast Asia
Việt NamTiếng ViệtVietnamese日本日本語Japanese中国中文Chinese
South America
BrasilPortuguêsPortuguese
NewsfeedBreaking
20:46 GMTFacebook, Instagram Delete Video of Brazilian President Linking COVID-19 Vaccines to AIDS
20:41 GMTEuropean Regulator Approves Booster Dose of Moderna Vaccine
20:39 GMTUS Very Supportive of EU's Engagement in Iran Nuclear Deal - State Dept.
20:31 GMTUpdated US Hate Crime Data for 2020 Shows Highest Incident Levels Since 2001 - FBI
20:23 GMTChinese FM Wang Yi to Meet Afghan Taliban Leaders in Qatar for First High-Level Talks
20:03 GMTJFK's Nephews Slam Biden Administration After Postponing Assasinaton Records
19:57 GMTUS Has No Issue With Russia-China Military Drills in Indo-Pacific Region - Pentagon
19:55 GMTTory MP Says Gender Self-Identification is a Threat to Women’s Rights
19:53 GMTYellen Appoints Counselor to Promote Racial Equity - US Treasury Dept.
19:44 GMTAfter Cricket Player Shami Gets Trolled, Indian Parliamentarian Says It Is 'Hatred Against Muslims'
19:42 GMTLavrov on Russia-NATO Relations: Cannot Catastrophic Because They Do Not Exist
19:09 GMTFlorida Gov. DeSantis Offering $5,000 to Unvaccinated Police to Relocate to Florida
19:04 GMTLaw to Protect Religious Structures on Government Property Now In Effect in India’s Karnataka
19:02 GMTKashmir to Witness First Ever Steel Plant as Modi Govt Pushes for Development in Violence Hit Valley
19:01 GMTIndian Start-up Unveils Fastest, Lightest Hypercar Ekonk with Top Speed of 309 Kmph
18:42 GMTFacebook Whistleblower Tells UK MPs Platform 'Unquestionably Making Hate Worse'
18:41 GMTIndian Farmers to Protest Nationwide Demanding Removal of Federal Minister Over Lakhimpur Violence
18:35 GMTAlec Baldwin’s Wife Says Impossible to Express Shock, Heartache After Shooting Incident
18:15 GMTFacebook Knew For Years Its Products Featured Human Trafficking Content, Internal Doc Reveals
18:15 GMTEgypt's El-Sisi Ends State of Emergency for First Time in Four Years