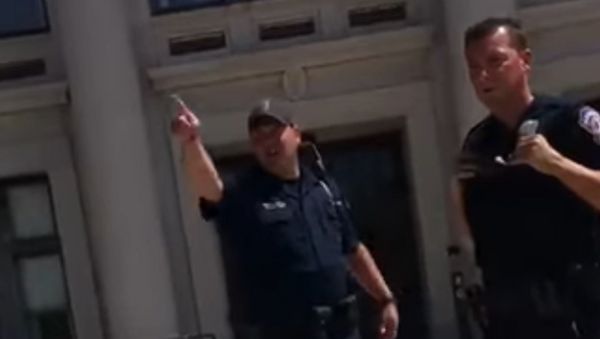 Video footage of a US police officer punching a student outside of Shortridge High School in Indianapolis, Indiana, has gone viral, resulting in the involved officer being placed on administrative leave.

During the incident, which took place Thursday outside of the high school, a woman, who appears to be the mother of a student who attends the school, gets into a heated argument with two Indianapolis Metropolitan Police Department (IMPD) officers.

An unidentified student then steps in front of one of the officers, who suddenly punches the student in the face for no apparent reason, right after someone off camera is heard saying, “Y’all need to chill out.” The video footage cuts off shortly after that.

Following the incident, an Indianapolis Public Schools (IPS) spokesperson released a statement: “The District has recently learned of an incident which appears to show an IMPD officer striking an IPS student. We are investigating this matter and taking every step to ensure the safety and well-being of our students is secured." It is unclear if the student involved attends Shortridge High School.

The IMPD also released a statement after the incident, saying that the officers arrived at the high school after receiving reports of a “large fight.”

“When officers arrived, they learned that there was a juvenile male on scene who IPS police had in custody. IMPD officers were flagged down by staff to assist with a parent during the lockdown,” the statement adds, also noting that “force” was used by one of its officers.

The IMPD also confirmed that the officer who punched the student has been placed on administrative leave.

“We encourage anyone with any additional information or video to come forward, as it will assist with the internal investigation,” the statement adds.