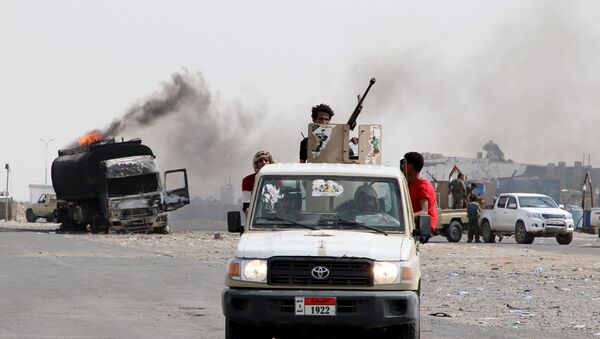 Earlier this week, the Yemeni Defence Ministry said that about 300 servicemen and civilians had died or were injured as a result of airstrikes by UAE forces on Yemeni government positions in the provinces of Aden and Abyan.

Earlier on Friday, a suicide bomber crashed his bomb-laden motorbike into a vehicle of the Southern Transitional Council on a roundabout in the Sheikh Saad district in northern Aden, AFP reported, citing its source.

The military head of the UAE-backed Security Belt force survived the attack, the agency says.

​Three of those on board the vehicle were killed and some more were injured, including civilians near a busy marketplace, according to the report.

There is an ongoing conflict between Yemeni government troops and the STC who used to be allies in the fight against the Houthi movement. On Thursday, the Yemeni Defense Ministry said that the United Arab Emirates, accused by Yemen of supporting the southern separatists, had carried out airstrikes in the provinces of Aden and Abyan, leaving at least 300 casualties among servicemen and civilians, with government troops forced out of Aden and other nearby settlements that had recently been recaptured.