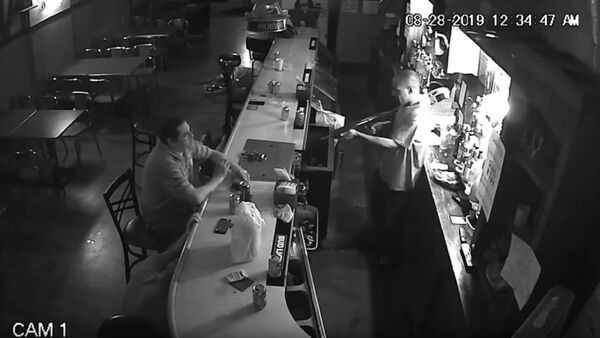 When a man with a big gun crashes into a bar and orders everyone to the floor, it’s usually wise to comply. However, one man at a bar in St. Louis, Missouri, did not cooperate with the armed robber who stuck a long-barreled weapon into his armpit.

Security camera footage published Friday shows a man decisively refusing to give his phone to the armed robber; despite being pushed with the barrel of a pistol, the patron calmly took his phone out of the bandit’s hand and put it on the table. The robber, apparently startled by the unexpected attitude, made no further efforts to enforce his dominance and went behind the bar looking for a cash register, as the unfazed bystander calmly lit a cigarette.

"I said not another punk trying to pull a punk move," the bar patron said later in an interview, according to NBC News. "I’m so tired of people in South City thinking they can control people because they wanna muscle their way in with firearms or attitudes or some sort of aggression."

He explained that he had a gut feeling the robber had no intention to cause bodily harm.

"I wasn't really concerned. I just had a really good feeling he wasn't out to harm anybody, he just wanted drug money," the man said.

The patron does not, however, recommend that others follow his example if they find themselves in a similar situation.

"It’s probably not in your best interest if they have a loaded [...] firearm, I wouldn’t suggest that to just anybody,” he said.

According to police, the robber, who is not yet identified, took the patrons' property and removed money from the cash register before fleeing. No injuries were reported after the robbery.