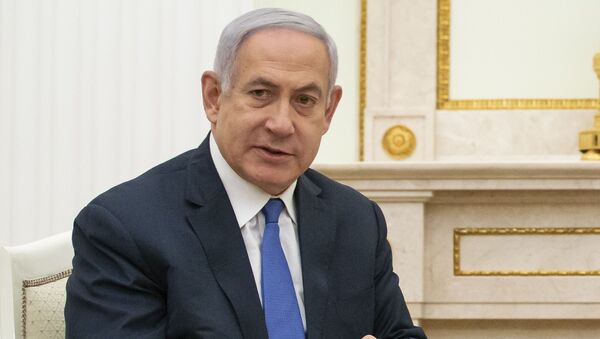 MOSCOW (Sputnik) - Israeli Prime Minister Benjamin Netanyahu on Friday rejected France’s attempts to ease tensions with Iran, saying it was "the wrong time" to negotiate with the Islamic republic.

"Prime Minister Netanyahu emphasized [to Macron] that those who provide shelter for aggression and arming will not be immune and added that the present – when Iran is stepping up its aggression in the region – is precisely the wrong time to talk with Iran," the prime minister was quoted as saying on the official Twitter of the Israeli Prime Minister.

Netanyahu went on to say that his country would defend itself if attacked and "prevent its enemies who seek its destruction from arming themselves with lethal weaponry."

Iran has been increasing its enriched uranium stockpile since the United States quit the 2015 deal and reimposed sanctions on Tehran. Later, Iran partially suspended its obligations under the deal and started to enrich uranium beyond the level outlined by the JCPOA.

Speaking during a G7 summit in France on Monday, US President Donald Trump said that he might agree to meet his Iranian counterpart under the right circumstances.