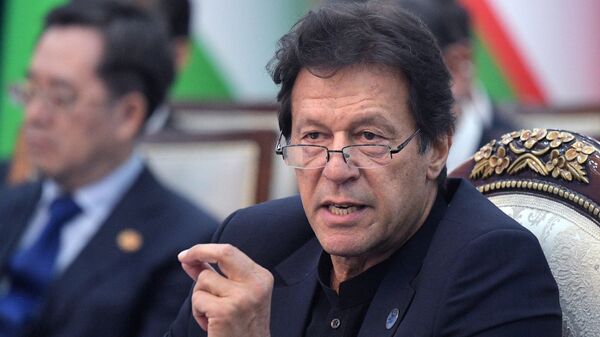 In a New York Times op-ed, Pakistani Prime Minister Imran Khan alleges that his Indian counterpart Narendra Modi is adopting the Nazi agenda of exterminating undesirable ethnicities and religions. Still, the Pakistan PM continues to call for peace and negotiation in a bid to avoid nuclear confrontation.

In an opinion editorial published by The New York Times, Khan commented on Kashmir and offered a solution to achieving peace between the two nuclear-armed nations.

According to the Pakistani prime minister, he has called for peace with India since day one of his tenure beginning in 2018. He has repeatedly written to Indian Prime Minister Narendra Modi calling for dialogue, but his offers do not receive a reply. Khan’s administration initially assumed that Modi was ramping up his anti-Pakistani rhetoric in view of the upcoming May elections. But as of now, Khan adopted a different view of Modi as a consecutive follower of Nazi ideology.

In the article, the Pakistani prime minister claims that PM Modi and a number of his ministers are members of Rashtriya Swyamsevak Sangh (RSS), which he calls a “Hindu supremacist group,” whose leaders openly express their admiration for Benito Mussolini and Adolf Hitler. He quotes M.S. Golwalkar, a founding father of the group, whom Modi allegedly admires, calling for India to take Nazi Germany’s purge of Jews as a ‘final solution’ to the adminstration’s concerns.

Khan says that Modi’s first term was marked by the “lynching of Muslims, Christians and Dalits by extremist Hindu mobs,” as well as “increased state violence against Kashmiris.”

After a February suicide bombing carried out by a “young Kashmiri” against Indian forces, Delhi blamed officials in Islamabad for the attack and sent fighter jets to bomb what were alleged to be terrorist camps in Pakistan. Pakistan retaliated by bombing Indian assets in Kashmir, which resulted in a dogfight. One Indian jet was taken down and its pilot was captured. Still, writes Khan, Pakistan continued attempts to initiate dialogue and work for peace, and even released the pilot without preconditions, but these calls fell on deaf ears, as India kept “lobbying to get Pakistan placed on the ‘blacklist’ at the intergovernmental Financial Action Task Force.”

On 5 August, Modi revoked Kashmir’s special status, which, according to Khan, violates the Indian Constitution, the United Nations Security Council resolutions on Kashmir, and the Shimla Agreement between India and Pakistan.

Modi justified the move by claiming that Jammu and Kashmir’s special status stripped Kashmiris of freedoms and benefits enjoyed by the rest of India. However, the Swarna Bharat Party’s (SBP) Sanjeev Sabhlok wrote in his blog that the Indian Prime Minister skipped essential steps required by the Constitution. The move is now being challenged in Indian courts.

The status removal in Kashmir was accompanied by a curfew which included cuts to phone lines and Internet access, followed by a “purge” in which thousands of Kashmiris were reportedly imprisoned by Indian authorities.

Khan has called on the international community to take action against India as a means of avoiding a nuclear standoff.

“If the world does nothing to stop the Indian assault on Kashmir and its people, there will be consequences for the whole world, as two nuclear-armed states get ever closer to a direct military confrontation,” Khan writes, adding that India made “not-so-veiled nuclear threats towards Pakistan,” saying that the no-first-use policy “depends on circumstances.”

“World War II happened because of appeasement at Munich. A similar threat looms over the world again, but this time under the nuclear shadow,” he warned.

Khan noted that a nuclear conflict is not the only option, suggesting that the situation can be defused via dialogue and negotiations.

“On Kashmir, the dialogue must include all stakeholders, especially the Kashmiris. We have already prepared multiple options that can be worked on while honoring the right to self-determination the Kashmiris were promised by the Security Council resolutions and India’s first prime minister, Jawaharlal Nehru,” he writes.

A dialogue can only commence, however, after “India reverses its illegal annexation of Kashmir, ends the curfew and lockdown, and withdraws its troops to the barracks,” Khan wrote.