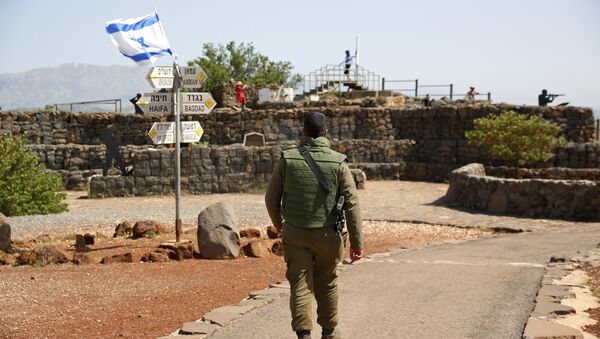 © AP Photo / Ariel Schalit
Subscribe
As tensions quickly increase between Israel and Lebanon, the Israel Defense Forces have canceled leave for northern combat brigades. Meanwhile, the United Nations has extended the mission for its 10,500-man peacekeeping force on the two nations’ border.

Israel’s Northern Command chief, Maj. Gen. Amir Baram, made the announcement Thursday, telling the Times of Israel it was done in part to calm the nerves of civilians living near the border with Lebanon, a UN-imposed separator called the Blue Line.

The Blue Line is a de facto border, created by the United Nations in 2000 to determine whether or not Israeli forces had totally withdrawn from Lebanon. However, the Blue Line differs from the internationally recognized 1949 borders, in some places by as much as several hundred meters.

The news comes as skirmishes between Israel and the Lebanese Shiite militant group Hezbollah have increased in recent days, following the August 25 airstrike by the Israeli Air Force that killed two Hezbollah members outside the Lebanese capital of Beirut.

Lebanese President Michel Aoun called the attack a “declaration of war,” noting it violated UN Security Council Resolution 1701, the 2006 agreement that ended the 2006 war between Israel and Lebanon.

Hezbollah, which defeated the IDF in that war when the latter invaded southern Lebanon, vowed a “calculated strike” in response that “wouldn’t lead to a war that neither Hezbollah nor Israel wants,” according to a Reuters report on Tuesday.

Baram told the Times of Israel Friday, “You should be preparing not for Hezbollah’s response against the IDF, but for their response to our response.” Recent days have seen Israeli aircraft simulating airstrikes on Lebanese positions in low-flying maneuvers.

“If an IDF soldier is so much as scratched, our response will be harsh,” he noted.

“The Israeli response to an attack will be disproportionate,” a senior IDF officer told Israel’s Channel 12 on Monday, the Times reported.

“The chief of staff has blanket approval to act to disrupt the Iranian entrenchment, and all actions [directed to that end] don’t require the decisions of the political echelon,” Baram told the mayors of several northern Israeli towns on Thursday.

Israel has alleged that Iran is trying to smuggle Hezbollah, its close ally, advanced missiles with which to attack Israel. Airstrikes carried out by the IAF on three separate countries - Iraq, Syria and Lebanon - in the last week targeted suspected groups and installations Tel Aviv believed to be linked to Iran, arousing fury and indignation across the region.

Also on Thursday at the UN headquarters in New York, the Security Council unanimously approved a motion extending the mandate of the 10,500-strong peacekeeping force in southern Lebanon, the United Nations Interim Force in Lebanon (UNIFIL).

The UNSC “condemned all violations of the Blue Line, both by air and ground, strongly calling upon all parties to respect the cessation of hostilities, to prevent any violation of the Blue Line and to respect it in its entirety, and to cooperate fully with the United Nations and UNIFIL,” according to the resolution’s text.

Tensions across the Blue Line previously flared up in December 2018 and January 2019, when Israel uncovered several Hezbollah tunnels that crossed underneath the demarcation line from Lebanon into Israel. UNIFIL came under rhetorical fire from Israeli Prime Minister Benjamin Netanyahu for having failed to either prevent the tunnels’ construction or to take action against them once they were discovered. However, the Lebanese daily Al-Akhbar noted that UNIFIL was constricted in its actions in the Shiite towns of southern Lebanon, which is the base of Hezbollah’s power.