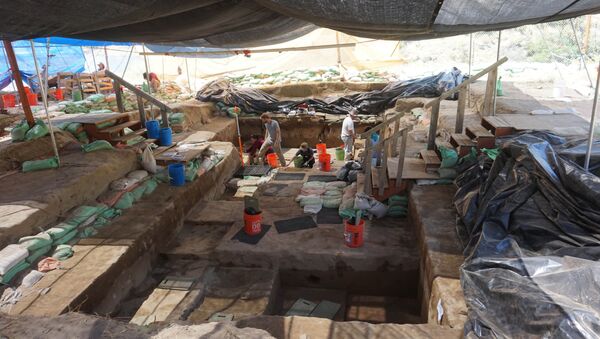 The age-old narrative of humans first inhabiting the Americas by way of the Beringia land bridge is being questioned following the radiocarbon dating of items found in present-day Idaho.

On Friday, an international team of archaeologists led by Loren Davis of Oregon State University published in ScienceMag groundbreaking data of artifacts recovered from Idaho’s Cooper’s Ferry that they say provides the earliest evidence of human life in the Americas.

The team’s research article details that radiocarbon dating performed on a cache of artifacts, such as stone tools and bone fragments, from the Cooper’s Ferry archaeological site “indicate an age between 16,560 and 15,280 years before present.”

According to the researchers, those who occupied the dig sites’ land, which is located along the Salmon River, used spears, darts and other weapons with projectile points to hunt and gather within small groups

“We hypothesize that this may signal a cultural connection between early peoples who lived around the northern Pacific Rim, and that traditional technological ideas spread from northeastern Asia into North America at the end of the last glacial period,” he explained to Reuters.

The team’s research pushes back against the widely accepted belief that human life in the Americas first began after the formation of the land bridge Baringa, which is now submerged under the Bering Strait and separates Siberia from Alaska.

While these early humans’ migration patterns are still unknown, Davis suspects they came along the Pacific coast by boat and proceeded to travel up the Columbia River Basin.

While Davis’ findings are significantly groundbreaking, not everyone in the archaeological community is sold on it.

Ben Potter of the University of Alaska in Fairbanks is skeptical of the age returned from the researchers’ radiocarbon dating, and also told the New York Post that he is not too convinced of the connection drawn by Davis’ team between their findings and Japanese artifacts.

Luckily, Cooper’s Ferry is notably rich in artifacts and future findings may offer additional insight and point to a more accurate representation of the travel routes taken by these early inhabitants of the Americas.