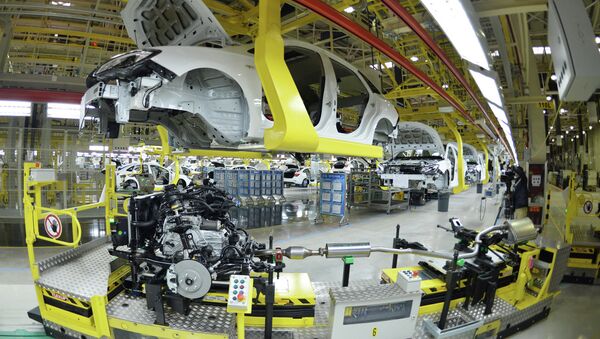 Oleg Burunov
All materialsWrite to the author
President Donald Trump has repeatedly called for US companies to bring jobs and production back to the United States, specifically ordering American companies to find alternatives to manufacturing in China.

US President Donald Trump has again taken aim at General Motors (GM), slamming it for moving its “major plants to China” despite receiving a hefty taxpayer bailout.

“Now they should start moving back to America again?” Trump tweeted, referring to GM as “one of the smallest auto manufacturers” which he recalled “was once the Giant of Detroit.”

General Motors, which was once the Giant of Detroit, is now one of the smallest auto manufacturers there. They moved major plants to China, BEFORE I CAME INTO OFFICE. This was done despite the saving help given them by the USA. Now they should start moving back to America again?

According to a 2014 report, the US government lost $11.2 billion in taxpayer dollars after it spent around $50 billion to shore up the company after it went bankrupt in 2009.

Trump Takes Aim at GM in Series of Previous Tweets

Trump’s latest criticism comes after he took to Twitter in mid-March to scold General Motors chief executive Mary Barra for a decision to close a number of plants in the US and Canada and the company's reluctance to sell the factories to a different owner, forcing thousands of people out of their jobs.

Just spoke to Mary Barra, CEO of General Motors about the Lordstown Ohio plant. I am not happy that it is closed when everything else in our Country is BOOMING. I asked her to sell it or do something quickly. She blamed the UAW Union — I don’t care, I just want it open!

“Just spoke to Mary Barra, CEO of General Motors about the Lordstown Ohio plant. I am not happy that it is closed when everything else in our Country is BOOMING”, he wrote.

That was the third time Trump had gone on Twitter at the time to express his frustration with GM's decision to shut several factories in the US and Canada.

Because the economy is so good, General Motors must get their Lordstown, Ohio, plant open, maybe in a different form or with a new owner, FAST! Toyota is investing 13.5 $Billion in U.S., others likewise. G.M. MUST ACT QUICKLY. Time is of the essence!

Democrat UAW Local 1112 President David Green ought to get his act together and produce. G.M. let our Country down, but other much better car companies are coming into the U.S. in droves. I want action on Lordstown fast. Stop complaining and get the job done! 3.8% Unemployment!

“GM let our country down, but other much better car companies are coming into the US in droves”, he tweeted, urging UAW Ohio division president David Green “to get his act together and produce”.

In an interview earlier that month, Trump said the company “is not going to be treated well” over its “nasty” decision to shutter its factories. He also criticised the company for only focusing on electric cars, calling it a “big mistake” and threatened to remove the automaker's tax credit for electric vehicles.

In November 2018, GM announced plans to cut 15,000 jobs and close manufacturing plants in Lordstown, plants in Michigan, and Ontario, Canada. The company also announced it would close auto parts factories in Michigan and Maryland.

Trump’s criticism of GM comes against the backdrop of the ongoing trade spat between the US and China which escalated last Friday when Trump said that Washington would raise the existing tariffs on $250 billion worth of Chinese goods from 25 percent to 30 percent starting 1 October.

In addition, tariffs would be raised from 10 percent to 15 percent on another $300 billion worth of Chinese goods starting on 1 September.

The move came in response to the Chinese State Council’s announcement that tariffs ranging from 5 to 10 percent would be applied to $75 billion worth of US goods, with some taking effect on 1 September and others on 15 December. Also, a 25-percent duty will be introduced on US cars.

The US and China have been engaged in a trade dispute since June 2018, when Trump stated that he was imposing tariffs on $50 billion worth of Chinese imports in a bid to balance the trade deficit.