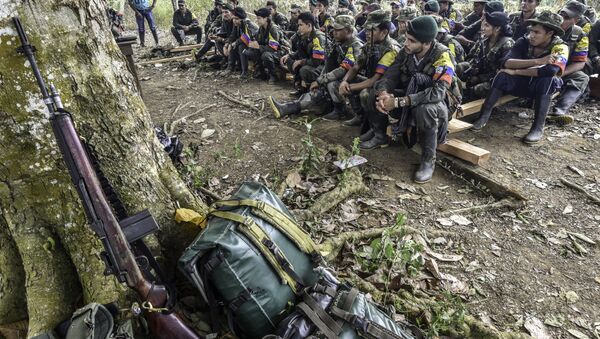 A Colombia peace tribunal has ordered the arrest of four Revolutionary Armed Forces of Colombia (FARC) rebel leaders who have pledged to rearm, AP reported Thursday.

On Thursday morning, former FARC commander Ivan Marquez, a key negotiator of the landmark 2016 peace accord, issued a video manifesto on YouTube calling for a revival of the armed struggle against the government of Colombia.

Marquez’s announcement reportedly followed deep polarization in Colombian society prompted by the murder of former rebels and human rights activists. He accused the Colombian government of President Ivan Duque of betraying the 2016 Havana Peace Accords that were intended to end 52 years of civil war.

Colombian High Commissioner for Peace Miguel Ceballos told reporters in Washington on Thursday that some 90 percent of the FARC, however, are still honoring the peace accord.

FARC was formed in 1964 as the military wing of Colombia's Communist Party. The half-century war between the FARC and the Colombian government claimed the lives of hundreds of thousands of people prior to 2016 when the movement laid down its weapons and was reorganized as a legitimate political party.

Former Colombian President Juan Manuel Santos was awarded the Nobel Prize for pursuing an agreement to end 52 years of conflict with the former FARC rebel group.