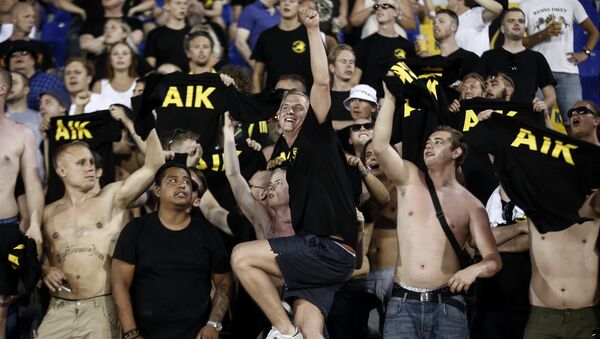 The stand-off between Celtic and AIK at Stockholm's Friends Arena has led to bitter clashes with police; three people have been taken into custody. The Scottish club, which is facing fines for the stir, blames the commotion on ultras from AIK's bitter rival Hammarby.

As FC Celtic cruised past Sweden's AIK in the Europe League qualifier, ugly scenes erupted during the break.

Riots broke out at half-time, when Celtic led by 2-1. The unrest lasted for a couple of minutes and about 20 guards were placed at the stands, according to the Swedish daily Aftonbladet. Several fans suffered minor injuries, and the clashes are highly likely to be reported to UEFA, which may result in fines for the Scottish club.

Following the clashes, which resulted in three people being taken into custody, Celtic pinned the disruption on fans of AIK's arch-enemy Hammarby. Celtic sources claimed around 350 away fans had been infiltrated by hooligans from Hammarby. The two Stockholm clubs, AIK and Hammarby, have had a bitter rivalry for decades.

“It was clear many Hammarby fans were in the Celtic sections and this was raised by Celtic officials before the match. A lot of Swedish fans managed to infiltrate the away section, which we believe was a major factor in the issues which arose. There was a lack of control at the access points to the Celtic section. We are aware that a number of Swedish supporters entered the area for visiting fans and we are currently investigating events,” a Celtic spokesman said, as quoted by the Daily Star. The team is promising a thorough investigation in order to defend the reputation of its supporters.

​Tweet: “Celtic accuse Hammarby fans after the brawl at Friends Arena: 'Many Swedish supporters took in among the away fans'

“We don't know anything about it. It is possible that there were supporters there, but it is about ultras or firms,” Kalle Strandberg, a press officer at Hammarby's supporters' Bajen Fans, told Aftonbladet, assuring that they “have no cooperation whatsoever with Celtics fans”.

Winning the match by 4:1 (and an aggregate of 6:2), the Scottish champions secured a place in Monday’s Europa League draw in Monaco.

The AIK-Hammarby rivalry is one of the most important derbies in Sweden; it traditionally gathers the largest attendance in entire Scandinavia.