Video: Elderly Commuter Beaten With Own Cane After Brawl Erupts on US Bus 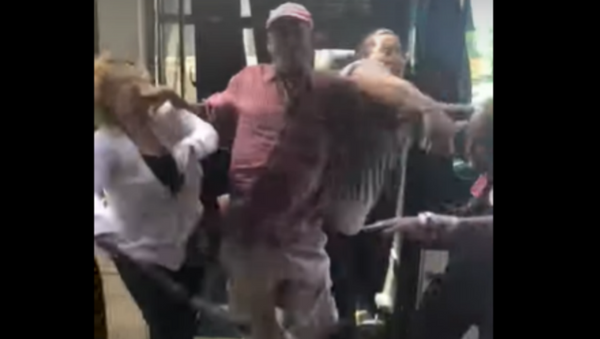 © Screenshot/Courtesy of All Media Access News
Subscribe
Two women in the Bronx borough of New York City viciously beat a 67-year-old woman after she threatened them with her walking cane, according to video footage captured by a bystander.

According to police officials, the two unidentified women got on the bus at the intersection of Grand Concourse and 161st Street in the Bronx.

One of the women, who was pushing a stroller with her child, bumped into the 67-year-old woman, whose identity is also unknown. The 67-year-old began yelling at stroller-pushing individual, as well as at another woman who appeared to be standing on the sidewalk in front of the open bus door while the vehicle was stopped.

At one point, one of the younger ladies tells the 67-year-old woman “to shut the f**k up.”

“You don’t tell me to shut the f**k up. You’re not my mother!” the older woman yells before pounding her cane on the bus floor and apparently gearing up for a physical altercation with the two younger women.

“Come the f**k on, then,” the 67-year-old woman declares, while the other passengers in the bus ignore the brewing altercation.

One of the assailants is seen hitting the 67-year-old in the face with the cane, while the other pulls on the woman’s hair and punches her in the face, and onlookers try to break up the fight. The altercation lasts for a few minutes before the 67-year-old woman walks away, still yelling.

The attackers fled the scene of the incident, and police were searching for them as of Wednesday, the New York Post reported.

Police also said that they spoke to the victim, but she refused medical attention, despite the fact that she was bleeding as a result of the altercation.

000000
Popular comments
These are the gems you will find everyday in ghetto america, and soon all over the western world, and who know, who knows...where else...just can't wait for that sh@# it!:x