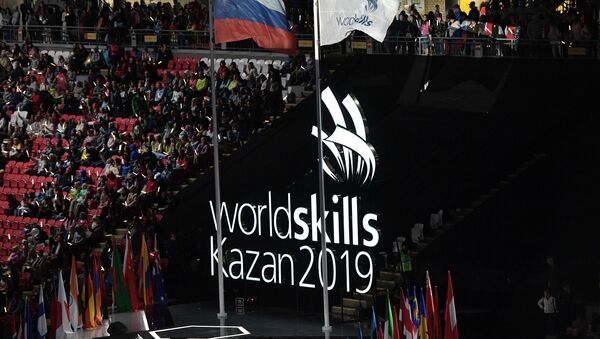 New Delhi (Sputnik): India’s first-ever gold medal at the 45th WorldSkills 2019 competition in Russia, along with one silver and three bronze medals, has left Twitter abuzz, with netizens cheering on the country’s best performance since it first participated in 2017.

Held in the sports-friendly Russian city of Kazan from 22 to 27 August, the WorldSkills competition is the world’s biggest competition dedicated to excellence in vocational work skills.

By securing 13th place out of 63 participating countries, the Indian contingent is winning millions of hearts for its amazing feat in the global competition.

The dream of a skilled nation is not far! Team India competed against 62 countries at WorldSkills Kazan 2019. Winning our first Gold, 1 silver & 2 bronze medals this team is an inspiration to the youth. #IndiaWinsAtRussia @MSDESkillIndia pic.twitter.com/VpdHt5AjYO

The first ever woman candidate from India to win @WorldSkills 2019 in Kazan, Russia- Shweta Ratanpura! She's won a bronze medal in the graphic design category and made us proud. Congratulations! #IndiaWinsAtRussia 🇮🇳 pic.twitter.com/3oOL8C7mgO

The winners received medals at a glittering closing ceremony on Tuesday, which was attended by Russian President Vladimir Putin.

The gold medal was clinched by Aswatha Narayan Sanagavarapu in the water technology category. He competed against skilled workers from 11 countries. He was awarded “Best of Nation” out of all Indian competitors present there.

The Indian contingent was the sixth largest at the ceremony; India's competitors also won 15 medallions in various categories, apart from the medals.

As Shweta Ratanpura became the first-ever Indian woman to bring laurels to India at WorldSkills Russia, twitterati heaped praise at her feat.

The first ever woman candidate from India to win @WorldSkills 2019 in Kazan, Russia- Shweta Ratanpura! She's won a bronze medal in the graphic design category and made us proud. Congratulations! #IndiaWinsAtRussia 🇮🇳 pic.twitter.com/56w6OpXW6L pic.twitter.com/XVsinuDmXJ

The talents in our innovation capital makes us incredibly proud.
Congratulations to Pranav Sriharsha Nutalapati, a 17-year-old, who won a silver medal at the WorldSkills competition held in Russia recently. https://t.co/Wo5jR1eqpx