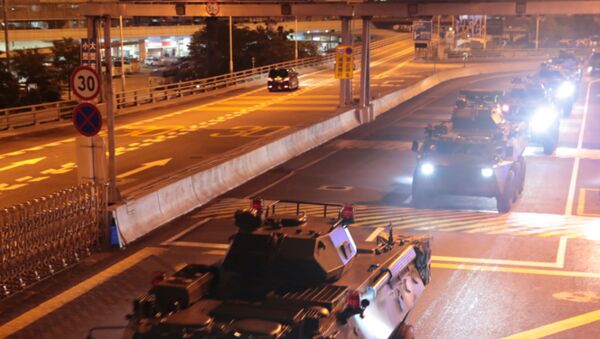 Many Hong Kongers were put on high alert Thursday morning as over 6,000 PLA troops arrived in the semi-autonomous city, which has been the site of protests and police clashes over opposition to the city government’s proposed extradition bill.

However, while many feared that Beijing had begun deploying troops in response to the political crisis, Chinese state media clarified that the movement was part of an annual rotation at “The Hong Kong Garrison of the Chinese People's Liberation Army.”

“Approved by the Central Military Commission, the move is a normal routine annual rotation in line with the Law of the People's Republic of China on Garrisoning the Hong Kong Special Administrative Region (HKSAR),” reads a military statement published by Xinhua.

The release also noted that this marks the 22nd rotation since the garrison was established in 1997.

Though the troops’ presence is nothing new, PLA Lieutenant-Colonel Yang Zheng touted in a recent PR video that they “learned about the situation in Hong Kong” before they arrived and have upped their training “to make sure we can fulfill our defense duties.”

This rotation came about less than 24 hours after the Hong Kong Police Force (HKPF) refused to allow protesters to hold mass rallies on Saturday.

Over this past weekend, demonstrations took a drastic turn as an officer fired multiple warning shots into the air. The incident is reportedly the first time live ammunition has been used since protests began.

"The escalating illegal and violent acts of radical protesters are not only outrageous, they also push Hong Kong to the verge of a very dangerous situation," read a Hong Kong government statement published earlier this week.

According to the HKPF, a total of 36 individuals were arrested on Sunday alone, with the youngest being 12 years old.

With negotiations seemingly at a standstill and violence on the rise, Hong Kong Chief Executive Carrie Lam told reporters that the possibility of requesting Beijing’s assistance is on the table.

“All laws in Hong Kong – if they can provide a legal means to stop violence and chaos – the SAR government is responsible for looking into them,” Lam told reporters Tuesday morning.

000000
Popular comments
Sir , it's hardly an intervention , you can't intervene in your own country . The militants from overseas have to be extracted and things brought back to normality . There are just too many US and UK flags being raised , that is the heart of the problem .