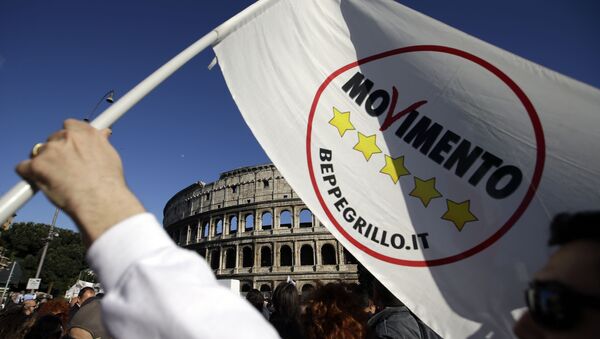 © AP Photo / Gregorio Borgia
Subscribe
GENOA (Sputnik) – Earlier in the day, President Sergio Mattarella gave the green light to Giuseppe Conte, who resigned as prime minister last week, to form a new government coalition after the previous one collapsed. The M5S and the PD agreed on Wednesday to form a government together under Conte.

Any government formed by Italy’s anti-establishment Five Star Movement (M5S) and the centre-left Democratic Party (PD) will hardly last after running into the same issues that broke up the previous coalition, according to Antonio Razzi, a former senator from the Forza Italia party.

"In my opinion, this government cannot last", Razzi said, adding that their government would be "disastrous" considering their opposing ideologies.

Both parties previously ruled out entering a coalition, with the M5S calling PD members "PDiots" at one point. The two are almost certain to clash over the financing of a multibillion-euro high-speed train link between Turin and Lyon, PD’s pet project vehemently opposed by the M5S.

"Consider all the statements that the Democratic Party was making that they would never join forces with M5S - and now they see M5S as great friends. What government are we talking about? These are all lies. Certainly, they say politics is always full of lies, but this is really too much", Razzi argued.

He accused the two parties of plotting to replace president Mattarella, whose mandate expires in 2022. A president in Italy is elected by the parliament.

"If it lasts, it will be the sign that M5S and PD have agreed on who to make the next president ... If the government lasts, it means that these two parties want to ‘eat’ Mattarella, it means they want to decide the fate of the new president", Razzi suggested.

The M5S cannot afford a snap election and has agreed to five conditions laid down by PD leader Nicola Zingaretti to stay in power. They were: a financial manoeuvre to find $25 billion for the 2020 budget to avoid an increase in the value-added tax; commitment to the European Union; a central role of the parliament and full recognition of representative democracy; a change in migration policy; and a breakthrough in economic and social policies.

"For sure, PD will command in the coalition. M5S has to agree on everything, because if they go to vote now, they will get not more than 10 percent of support, they will lose at least 20 points, because people no longer trust them. So M5S will do everything to last 5 years", Razzi explained.

As for Italy’s foreign policy under the compromise government, the former senator predicted that it would become more "agreeable" when dealing with the European Union and less so in the case of relations with Russia, with whom League leader Matteo Salvini struck a friendlier tone.

Italian President Sergio Mattarella on Thursday received Giuseppe Conte, who recently resigned as prime minister, and asked him to form a new government.

Views and opinions, expressed in the article are those of Antonio Razzi and do not necessarily reflect those of Sputnik.