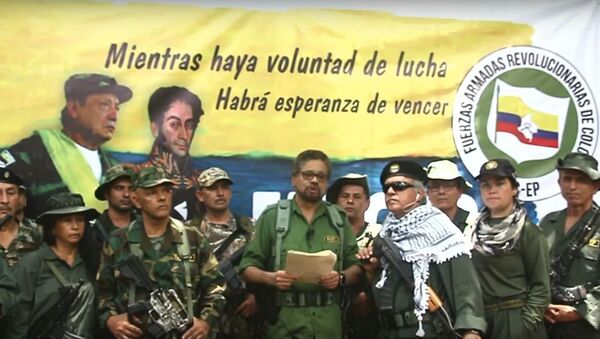 The video featured Ivan Marquez, former commander of the group who was a key negotiator of the landmark peace accord between the rebels and the authorities in 2016. The announcement comes amid deep polarisation in Colombian society prompted by the murder of former rebels and human rights activists.

A group of former guerillas from the Revolutionary Armed Forces of Colombia (FARC) have published a call for arms on Youtube vowing to launch a new offensive.

In a 32-minute manifesto filmed in Colombia's Amazon region, two former leaders of the group Ivan Marquez and Jesus Santrich announced the continuation of their armed struggle.

"This is the continuation of the rebel fight in answer to the betrayal of the Havana peace accords by the state. We were never beaten or defeated ideologically, so the struggle continues," Marquez said.

According to Marquez, the group will seek coordination with leftist rebels from the National Liberation Army and will not resort to kidnapping in order to obtain funding.

The government has not yet commented on the rebel statement.

Last year, the President of Colombia Ivan Duque stated that he wanted to change the terms of the 2016 peace deal.

The landmark agreement in question was signed after four years of talks preceded by decades of struggle between FARC rebels and the government.

FARC was established in 1964 as the militia of a local communist party. It subsequently launched a war to overthrow the government of Colombia and install a revolutionary regime using kidnapping and extortion as its main sources of funding. The half-century war between the FARC and the Colombian government claimed the lives of hundreds of thousands of people prior to 2017 when the movement laid down its weapons and was reorganised as a legitimate political party.