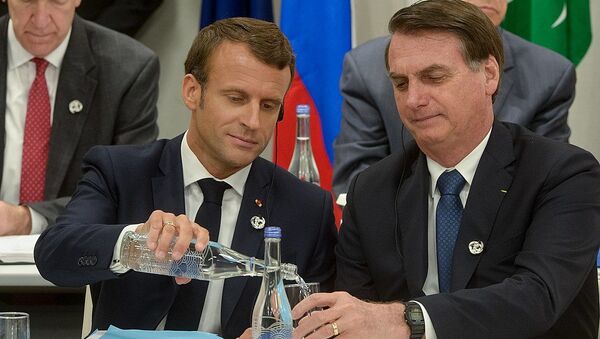 On 27 August, President Jair Bolsonaro said Brazil would reject a $22 million aid package from the G7 group to help fight fires in the Amazon rainforest unless his French counterpart, Emmanuel Macron, offered an apology for the "insults" against him. The statement followed a war of words between the two presidents amid the Macron-hosted summit in the French town of Biarritz.

Later in the day, Brazilian presidential spokesman Rego Barros clarified that the country was ready to accept foreign assistance, but only if it could decide how to spend this money.

According to Roder, Bolsonaru made a "huge mistake" by rejecting help. She believes that in addition, his actions may cause "diplomatic stagnation", while the sluggish Brazilian economy could have benefited from an agreement between Mercosur and the EU.

"Diplomatic relations can be destroyed quickly, while their restoration could take many years", she stresses.

Furthermore, "Brazil is losing its global positions in the fields of the economy and environmental protection", Roder highlights, adding that the country has long been a global leader on climate change.

"Brazil is an 'environmental power', and this is not debatable", she points out. "Since 1992 [when the United Nations Conference on Environment and Development was held in Rio da Janeiro], the country has been trying to conduct a more active foreign and domestic policy on environmental protection, and to take the lead on this".

The spat between the two presidents erupted last week after Macron called the Amazon fire "an international crisis" ahead of the 45th G7 summit and accused Bolsonaro of lying to him about Brazil's commitment to combating the climate emergency.

"The president can only conclude that President Bolsonaro lied to him in Osaka [G20 summit, in June 2019]," the French president's office said on 23 August.

Macron further threatened to block the EU-Mercosur free trade agreement, a long-anticipated deal involving Brazil, that was announced in June 2019 following almost two decades of negotiations. According to Bloomberg, the deal, that has yet to be signed by the parties concerned, could boost the Brazilian economy by $90 billion over the next 15 years.

Bolsonaro hit back at Macron on Twitter lambasting him for interfering in Brazil's domestic affairs. The Brazilian president stressed that the suggestion that Amazonian issues be discussed at the summit without the participation of the regional players evokes "a misplaced colonialist mindset in the 21st century".

To add to the controversy, it turned out that Bolsonaro endorsed a Facebook post mocking Macron's 66-year-old wife Brigitte which triggered a new wave of criticism from his French counterpart who dubbed the move "extremely disrespectful".

"He said very disrespectful things about my wife. I have great respect for the Brazilian people and can only hope they soon have a president who is up to the job," Macron said Monday.

The same day the French president, the host of the G7 summit in Biarritz, announced that the group's members had decided to allocate $22 million to tackle fires in the Amazon. While the Brazilian government is still considering the proposal, some mainstream media sources have drawn attention to the fact that the sum is nowhere near $945 million pledged for Paris's Notre-Dame restoration less than 24 hours after the cathedral caught fire.

Fires erupted in the Amazon rainforest earlier this month and have been raging for weeks. According to Brazil's space agency INPE, the number of fires in Brazil is 80 per cent higher than last year. The Brazilian government has deployed 44,000 troops to tackle the blazes.