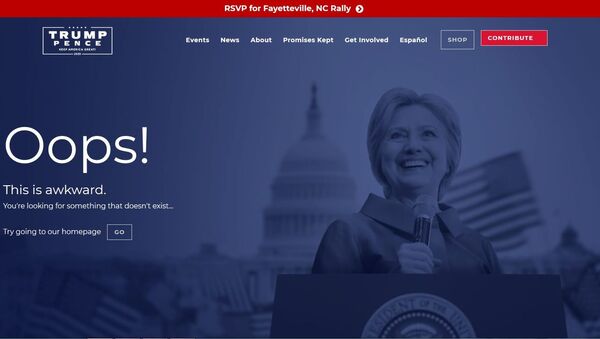 Egor Efimchik
All materials
When you search for a non-existent web page, the server displays a 404 error page; Donald Trump’s website presents its own version, which offers a picture of Hillary Clinton in front of a POTUS podium as an example of “something that doesn't exist”.

The US president’s website, donaldjtrump.com, appears to poke fun at Hillary Clinton’s failed run for the White House.

When you type in a non-existent subpage on the site (for instance, donaldjtrump.com/greenland), you get redirected to the 404 page, which says that “you’re looking for something that doesn’t exist.”

And in what looks like all but sheer trolling, the background is an image of Hillary Clinton standing on Capitol Hill behind a lectern that sports the seal of the US president.

This is not the first Easter egg on a Trump website ridiculing his political opponents.

In late 2017, Washington Post data reporter Christopher Ingraham discovered that the message popping up on action.donaldjtrump.com in case of an internal server error was meant to take a dig at former President Barack Obama, reading: “Oops! Something went wrong. Unlike Obama, we are working to fix the problem… and not on the golf course.”

The message, however, was nowhere to be seen on the website, because the code contained a single equal sign where there should be two and was apparently broken.

The best part about this is that they are using the '=' (assignment) operator which means that bit of code will never get run. If you look a few lines up 'errorCode' will always be '404'

​The golf error message has since been removed.