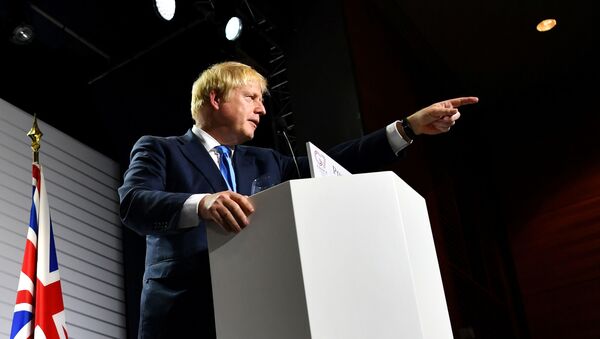 British Prime Minister Boris Johnson plans to deliver Brexit by the end of October, “deal or no deal”, with the recent move to suspend the British Parliament until 14 October helping Johnson’s government thwart any moves that could prevent it from doing so.

Boris Johnson’s government asked the Queen to suspend Parliament from mid-September, shortly after MPs return to work, until 14 October – a move which is believed to disrupt efforts aimed at preventing a no-deal Brexit.

The British PM explained his decision to suspend the Parliament in a letter to Conservative MPs by stating that the previous parliamentary session had lasted mush longer than usual – for 340 days – and thus needed to be brought to a close in order to outline “key Brexit legislation” in a new session.

Mr Johnson also denied that the suspension of the Parliament would prevent MPs from debating the possible alternatives prior to 31 October.

"That is completely untrue. If you look at what we're doing, we're bringing forward a new legislative programme. There will be ample time on both sides of that crucial 17 October (European Union leaders') summit, ample time in parliament for MPs to debate the EU, to debate Brexit and all the other issues, ample time".

The move was announced just hours after Labour leader Jeremy Corbyn met with other leaders of the opposition in order to discuss joint actions and agree on a pact to thwart a no-deal Brexit.

Several UK politicians have given their opinions on the news of the suspension of the UK Parliament.

Pro-EU Conservative legislator Dominic Grieve said that the suspension of the UK Parliament is more likely to lead to a no-confidence vote.

“This is an attempt to govern without Parliament. It’s pretty unprecedented, and I think the prime minister will come to regret it”, Grieve told the BBC, also suggesting that the legislators would try to prevent prorogation by holding a no-confidence vote, which would be supported by him.

“I think (a no-confidence vote) is more likely, because if it is impossible to prevent prorogation, then I think it's going to be very difficult for people like myself to keep confidence in the government, and I could well see why the leader of the opposition might wish to table a motion for a vote of no-confidence”, added Grieve.

John Bercow, the speaker for the UK Parliament, called the government's intention to suspend Parliament a “constitutional outrage”.

"However it is dressed up it is blindingly obvious that the purpose of prorogation now would be to stop Parliament debating Brexit and performing its duty", added Bercow.

He was echoed by Philip Hammond, MP for Runnymede and Weybridge.

MP for Hackney North and Stoke Newington and current Shadow Home Secretary Diane Abbot argued that Boris Johnson’s move should be regarded as “a coup against Parliament”.

Boris Johnson is aiming for a coup against parliament. Against you the voters and your political representatives. For a disastrous No Deal where the only one to benefit is Trump https://t.co/4sz76f0FbP pic.twitter.com/DWamMw3Nhn

Tom Watson, the deputy leader of the main opposition Labour Party, believes that the action is a “scandalous affront to democracy”.

"We do not have a 'new government'. This action is an utterly scandalous affront to our democracy. We cannot let this happen".

Representatives of the Pro-Brexit campaign group Leave.EU praised Johnson’s plan, arguing that he is a PM who is willing to “defend the will of the British people”.

"Boris is set to ask the Queen to suspend Parliament until October 14, paving the way for a new Queen's Speech - and preventing the Brexit-wrecking Remainers from blocking a WTO Brexit. Finally, a PM who is willing to step up and defend the will of the British people!"

Nicola Sturgeon said that the move could mark a "dark day” in UK history.

"So it seems that Boris Johnson may actually be about to shut down Parliament to force through a no deal Brexit. Unless MPs come together to stop him next week, today will go down in history as a dark one indeed for UK democracy".

"If BBC News are correct @BorisJohnson's just thrown down the gauntlet to Parliamentary democracy. The mother of all Parliaments will not allow him to shut the #PeoplesParliament out of the biggest decision facing our country. His declaration of war will be met with an iron fist".

A no-deal Brexit is a divisive issue, as it means that the UK would leave the European Union overnight without any agreement in place about the departure from the single market or the customs union, thus raising questions about trade policies between Britain and EU states. Such a scenario would also lead to the UK immediately withdrawing from common European institutions such as the European Court of Justice.

One of the major issues underlying the problem of a no-deal Brexit is the emergence of a hard border between British Northern Ireland and the Republic of Ireland, which is a member of the EU, thus undermining the “Good Friday Agreement” that ended the bloody conflict between Irish nationalists and British loyalists. However, the Irish backstop option set by the existing deal provides that Northern Ireland would remain inside the customs union, potentially undermining British economic sovereignty and cutting the island of Ireland off from the rest of the UK. The Irish backstop solution was one of the reasons that the Brexit deal was voted down by pro-Brexit British MPs three times this year.