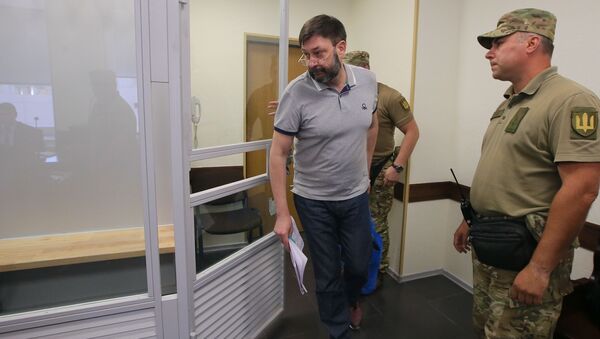 Tim Korso
All materials
The head of RIA Novosti Ukraine was arrested on charges of treason, allegedly supporting the self-proclaimed republics in Ukraine's eastern Donbass region, and illegally possessing a firearm that was found in his safe during a search. The journalist himself repeatedly denied all the accusations. He has since spent over 400 days under arrest on these charges.

Head of the news outlet Ria Novosti Ukraine, Kirill Vyshinsky, was released on 28 August on the orders of a Kiev appeals court judge. His detention was downgraded to release on personal recognizance with Vyshinsky being obliged to appear in court or give testimony to investigators if necessary.

Vyshinsky stated that he doesn't have any plans right now, but assured that he intends to participate in his trial in Kiev.

"I have no legal and human reasons to hide from the judicial investigation, since, as I have been saying from the very first day of my detention [...] the accusations that I face are so very absurd that it's in my interests to study them during a court process and prove [...] the futility of these charges", Vyshinsky said.

He also recalled that he had refused to take part in an exchange of prisoners a long time ago and that his position on the matter hasn't changed since then.

Following the court's decision, Vyshinsky stated that his incarceration was an attempt by previous President Petro Poroshenko to raise his ratings. The journalist added that this move cost Poroshenko his seat and Vyshinsky himself – his freedom.

Kremlin spokesman Dmitry Peskov said Moscow welcomed the Kiev court's ruling to release Vyshinsky from custody, but will not evaluate this decision at the moment. Russian Foreign Ministry spokeswoman Maria Zakharova, for her part, has called the journalist's release from custody the "first step on the path to justice" in his case and in improvement of journalists' rights in general in the country. She further added that Moscow is counting on Vyshinsky’ full exoneration on all the fabricated charges.

The head of the Rossiya Segodnya news agency Dmitry Kiselyov has also commented on Vyshinsky's release, saying that it only stresses that the whole case was politically motivated and that by releasing the head of Ria Novosti Ukraine, Ukrainian President Volodymyr Zelensky is simply trying to boost his position in negotiations with Russia. 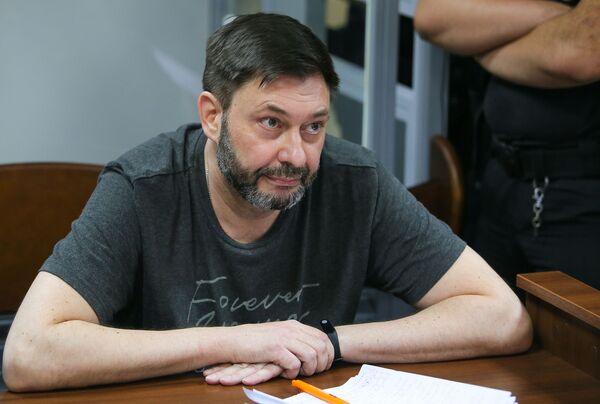 The German Foreign Ministry has praised the Ukrainian Court of Appeal's decision to release the journalist, calling it a step in the direction of press freedom in the country. The ministry noted that while it doesn't know the details of the investigation, it still urges the hasty resolution of the Vyshinsky case. The court's decision was also hailed by Russia's Mission to the OSCE, who called it a "triumph of truth".

In July, a Ukrainian Court extended Vyshinsky's arrest until 19 September as a "precautionary measure" at the request of the prosecutor despite protests by the journalist and his lawyers. On the same day, Ukrainian President Volodymyr Zelensky stated that Kiev was ready to swap Vyshinsky for Ukrainian film director Oleg Sentsov, jailed in Russia for plotting terrorist attacks. 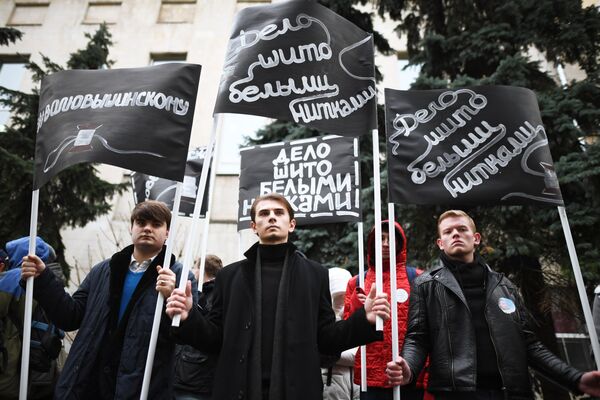 The head of Ria Novosti Ukraine was arrested on 15 May 2018 on suspicions of supporting the self-proclaimed republics in Ukraine's eastern Donbass region and treason, potentially facing 15 years in prison.

Russian President Vladimir Putin called the case against Vyshinsky politically motivated and accused Ukraine’s former authorities of targeting journalists in the country. The Organisation for Security and Co-operation in Europe (OSCE) representative on freedom of the media, Harlem Desir, also expressed concern regarding the freedom and rights of journalists in Ukraine in light of Vyshinsky's arrest.