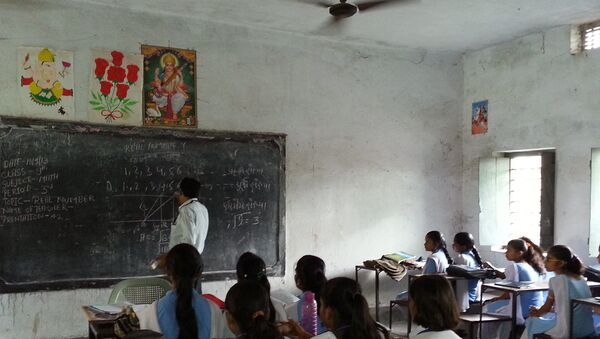 CC BY-SA 2.0 / TESS India / 0010 - A teacher explaining a maths concept using TESS-India explained example
Subscribe
New Delhi (Sputnik): An influential group affiliated with the parent organisation of India’s governing party, the BJP, has strongly objected to a proposal mooted by the Narendra Modi government for imparting sex education to schoolchildren in the country.

The proposal is part of a draft education policy awaiting a final nod since May from India’s Ministry of Human Resources, which deals with education.

“Why should it be taught in schools? There is no need for teaching sex education in schools or making it a part of the curriculum. If required, counselling can be provided for a student in schools”, Atul Kothari, an official with the organisation, told reporters in New Delhi.

“Things that students should be aware of in terms of physical structure etc. are already being taught through subjects like biology. However, counselling on a need basis can be done for the students”, he added.

Kothari claimed that wherever "sex education" has been implemented, it has had negative effects and should be avoided.

Since founding the SSUN, its chief, Batra, has been mired in controversy among many sections of society in the past for his opposition to sex education in schools.

He has been a strong advocate of making various changes in Indian history and giving more importance to Vedic mathematics, Sanskrit, personality development, life values and physical training in the modern Indian education system.

The National Education Policy draft, which was submitted to the ministry in May this year, states that sex education will be included in secondary school studies on topics like consent, harassment, respect for women, safety, family planning, and prevention of sexually transmitted diseases.

Last year, the Indian government made stringent laws to award the death penalty to anyone including, juveniles, found guilty of raping a girl below the age of 12. The changes were made against the backdrop of a rising number of rape/harassment cases in which offenders have been juvenile or under 18 years of age.

SSUN is linked to the right-wing social-cultural organisation Rashtriya Swayamsewak Sangh (RSS), the parent group of the governing BJP.