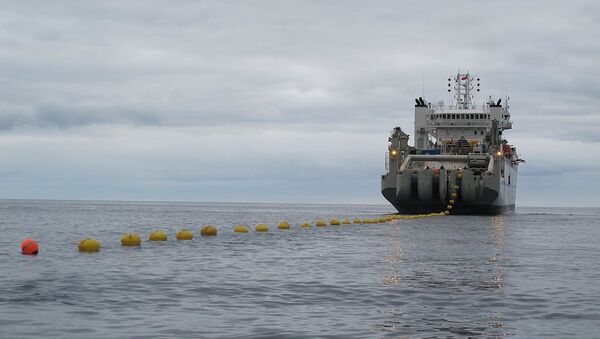 The US Department of Justice is trying to block completion of an 8,000-mile long undersea internet cable connecting the US and China, claiming the Chinese telecom partner helping build it raises “national security and law enforcement concerns” due to its owner’s proximity to the Chinese government and Huawei.

A report in the Wall Street Journal Wednesday citing “people involved in the discussions” said that a multiagency panel led by the DOJ that also includes the Defense and Homeland Security departments, known as Team Telecom, had raised objections about the security of the Pacific Light Cable Network, an 8,000-mile long fiber optic cable being built jointly by Facebook, Google and Dr. Peng Telecom & Media Group Co.

The decision is ultimately up to the Federal Communications Commission, the FCC has “historically deferred to recommendations from Team Telecom,” the WSJ noted.

The DOJ has so far not commented on the story, but told Business Insider in a statement Wednesday, "DOJ does not comment on its ongoing assessment of applications that the FCC has referred for national security and law enforcement concerns arising out of foreign investment or control."

"DOJ's reviews and subsequent recommendations to the FCC on behalf of Team Telecom are tailored to address the national security and law enforcement risks that are unique to each applicant or license holder," he said.

The $300 million project was begun in 2016 and is nearing completion. Google manages the US landing site in Los Angeles, California, and Dr. Peng the Chinese side.

It’s Dr. Peng, a private telecom firm that’s become China’s fourth-largest by revenue, that is raising eyebrows at the DOJ. In 2014, Dr. Peng partnered up with Huawei in a “strategic agreement … on areas such as big data, cloud computing and ultra-wideband,” Reuters reported at the time. Dr. Peng’s website lists Huawei as a partner.

In May, following months of scaremongering, the US Commerce Department blacklisted Huawei, the Shenzhen-based telecom company that’s become the world’s largest telecom equipment maker and second-largest cellphone maker, claiming the company had been ordered by Beijing to put a “backdoor” into its services that would enable the Chinese government to surveil user data.

The move is part of a growing pushback against Chinese telecom companies on the rise, for which US intelligence officials have cited similar security concerns. The May blacklisting included 70 of Huawei’s affiliates, and several nations, including the US, Japan and Australia, have barred government or military officials from using phones made by ZTE, another Chinese firm.

Dr. Peng was founded in 1985 in Chengdu as a steel company, but in 2007 the firm sold off its unprofitable steel assets and completely remade itself as a telecommunications company by buying Teletron Telecom. By 2012 it had become China’s largest private broadband operator, and by 2018 it operated 15 data centers across China.

However, Caixing reported in May that Dr. Peng was once again trying to remake itself, as it considers selling off its slagging residential broadband assets to the big three state telecoms - China Mobile, China Telecom and China Unicorn - and shifting to providing services for the big three, such as maintenance, installation and customer care.

The WSJ noted that Dr. Peng has also done numerous jobs for government entities, such as a fiber optic surveillance network for Beijing police. The chairman of Dr. Peng, Yang Xueping, is a former government official from Shenzhen.

However, if the FCC were to deny Pacific Light the opportunity to renew its application when the existing one expires in September, it would be a first. But then, Team Telecom has never objected to an undersea cable project before, either, including one to China, WSJ noted.

However, with an Asian landing in Hong Kong, the site of months of political turmoil, security at the far end of the cable might not enjoy the confidence US regulators would have once had, WSJ noted.

Proponents of the deal argue that with a hub on US soil, Washington would be better able to regulate security on the cable than if it cancelled the deal and the cable landing wound up being built in another country. Further, the cable, which according to the company will be able to handle 120 terabits per second of data, will serve as a vital trade artery between US firms and those in burgeoning regional markets such as in the Philippines, Malaysia, and of course mainland China as well.