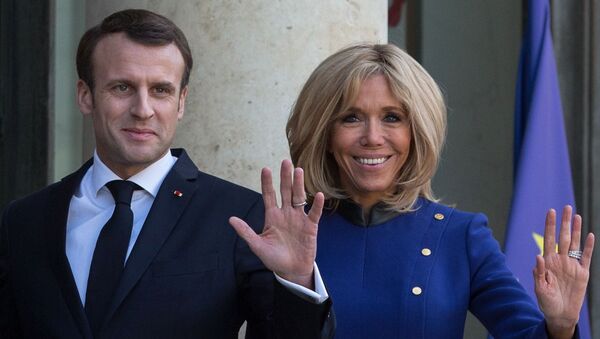 A recent spat between the Brazilian and French presidents over fires raging in the Amazon led to an unpleasant exchange of comments on a personal level when Jair Bolsonaro allegedly mocked Macron’s wife on social media, sparking a wave of criticism from Brazilians.

Brazilians have taken to social media in order to send their apologies to Brigitte Macron, the 66-year-old wife of French President Emmanuel Macron, for remarks made by Brazilian President Jair Bolsonaro, who recently humiliated the first lady with a comment on social media.

The story unfolded when one of Bolsonaro’s supporters posted a picture on the Brazilian president’s Facebook page comparing Brigitte Macron to Michelle Bolsonaro, the Brazilian head of state's wife, who is 29 years younger than her French counterpart, commenting “you understand now why Macron persecutes Bolsonaro".

The Brazilian president, in turn, liked the comment and responded by saying “do not humiliate the man hahaha".

When asked about the remarks during a press conference on Monday, 26 August, President Macron said that they were “extremely disrespectful” to his wife and France’s first lady.

"It's sad, and it's sad first of all for him and Brazilians. Brazilian women are probably feeling ashamed of their president", Macron said at the G7 press conference.

Macron also hinted at Bolsonaro’s unprofessionalism following his comment by adding that he hopes that the people of Brazil “will very soon have a president who is up to the job”.

Brazilians rushed to social media in order to apologise for their president’s comments, with the “Desculpa Brigitte” hashtag – which can be translated from Portuguese as “Sorry Brigitte” – becoming a trend on Twitter. Many users expressed their condolences to the French president’s wife by condemning Bolsonaro’s remarks.

Forgive us Lady Macron, first I don’t speak French (I would love to), second I didn’t vote to him and I’m actually crying for everything. You’re an amazing woman and your husband is a marvellous man. 😭💔#DesculpaBrigitte #PardonnevousBrigitte @EmmanuelMacron pic.twitter.com/CsLQuoTFxu

#DesculpaBrigitte sorry about my country’s president. He doesn’t represent us at all.

One message even came from Brazilian novelist and famous author of “The Alchemist” Paulo Coelho, who apologised to Brigitte Macron in French for “the crisis, the hysteria of Bolsonaro toward France, the French president and the French first lady”.

Some, however, used the opportunity to compare President Macron's looks with his Brasilian counterpart Bolsonaro – often perceived as not being in the latter's favour.

It has been reported by France24 that news about abundance of comments reached Brigitte Macron, who was apparently touched by the messages and support from the Brazilian community.

In the meantime, the Amazon rainforest, which produces around 20% of our planet’s oxygen, continues to burn in Brazil, with Macron announcing on 26 August that the G7 would send Amazonian countries financial support worth of 20 million euros. Jair Bolsonaro, however, rejected the offer following the unfavourable exchange of comments with Emmanuel Macron, who had earlier also pressed him on his inaction in relation to the wildfires, arguing that Brazil would accept financial aid only if the French president publicly retracted his criticism.