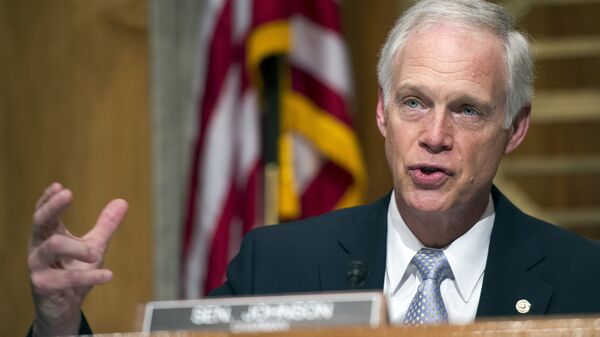 MOSCOW (Sputnik) - While Johnson claimed in his statement on Monday he had hoped to "set the stage for better future relations" between the countries, he has in fact spearheaded several bills seeking to target Russia in retaliation for alleged aggression in Ukraine. He has also pushed for sanctions against the Nord Stream 2 pipeline.

US Senator Ron Johnson, who has claimed that he has been denied a Russian visa for entering the country as part of a congressional delegation, has been included in Russia's "stop list" as a response for Washington's move to include Russians in a similar travel ban list, and he has long been aware of this, the Russian Foreign Ministry said on Tuesday.

"This is what we call manipulating information. He is on the stop list, as a response for including Russian representatives there, which he has long been aware of," the Russian Foreign Ministry said.

The Russian Embassy in the United States said earlier in the day that Johnson had not applied for a visa.

"He has not applied for a visa, but he has presented the information as if he has been denied the visa after applying for it," the ministry added.

"This time, Ron Johnson has not approached us. We are not aware of the aim of his visit. All the other questions, related to visas, should be addressed to the Foreign Ministry", Kosachev said.

Commenting on Johnson's resentment, Kosachev said that he would recommend to the Republican senator to spare a thought on Washington's decisions on including Russian lawmakers in sanctions list.

Russia has repeatedly offered to Washington to start downsizing sanctions lists, removing parliamentarians from there, and Johnson is perfectly aware of this, Kosashev stressed.

"Unfortunately, we have not seen any practical reaction by US senators and congressmen to our offers", Kosachev said.

Johnson, who is a member of the Republican Party, spearheaded several bills seeking to target Russia in retaliation for alleged aggression in Ukraine, which Moscow denies. He has also pushed for sanctions related to the Nord Stream 2 gas pipeline project.