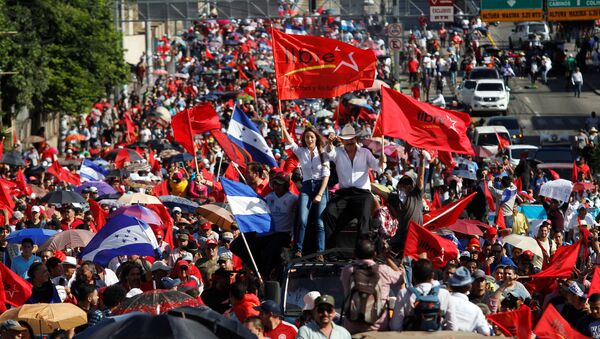 Between swelling protests and a US federal court case, few in Honduras expect President Juan Orlando Hernandez to finish his term in 2022. While US Democrats are positioning themselves as bringers of salvation, few are looking to Washington for answers, an anthropologist told Sputnik Tuesday.

In Honduras, waves of protests against the government of Hernandez have surged since May, with few now expecting “JOH” to finish his term. With 1% of Honduras’ 8-million-strong population expected to seek refuge in the US this year, US Democrats, seeking a humanitarian solution to the growing migrant crisis, have promised renewed investment in the region.

​However, the problem isn’t poverty or lack of development, it’s continued US meddling in the region whenever governments come to power that oppose US interests, Dr. Adrienne Pine, an associate professor of anthropology at American University and militant anthropologist who recently returned from covering the protests in Tegucigalpa, told Radio Sputnik’s By Any Means Necessary Tuesday.

Hernandez has “lost a massive amount of credibility,” both domestically and internationally, Pine told hosts Eugene Puryear and Sean Blackmon, since news broke about him being implicated in a US Drug Enforcement Agency (DEA) investigation of his younger brother, Juan Antonio Hernandez, who is accused of running a cocaine smuggling operation.

Honduras hosted the annual regional Tuxtla Summit last week in San Pedro Sula, and almost no Latin American heads of state attended. “The fact that he’s being investigated in a federal lawsuit … and being labeled basically a cocaine trafficker and drug kingpin, has really harmed his credibility.”

“The signals that we’ve gotten from [US] Embassy in Honduras” only show unwavering support for Hernandez, Pine said. “Meanwhile, there are these other signals coming out: the fact that there was the release of the information that the DEA had been investigating him since 2013 that came out in May, and then this more recent release from the Southern District Court of New York demonstrating that he’s being investigated. So, it’s hard to know which parts of the federal government are doing what. But my sense is, and this is the sense of a lot of Hondurans, is that the United States government is kind of fed up and embarrassed by him, but can’t stop supporting him, because they’ve supported him all along.”

This footage from a protest last week against the US-backed narco-dictator Juan Orlando Hernandez is essential viewing for anyone wondering about the migrant crisis. US-trained cops stone Prof. @adriennepine and tear gas students. Young children gather scraps to sell for $2.45USD pic.twitter.com/sezLuv8U3n

​“It’s that kind of violence that the US has made possible and has really staked everything on this drug kingpin ruling the country, because he does it in a way that’s favorable to US business interests,” Pine said.

According to US trade data, the US imported $2.5 billion in goods from Honduras in the last year. The top two imported commodity groups were listed as “sweaters, pullovers, vests, knit or crocheted” and “t-shirts, tank tops, knit or crocheted,” which amounted to some $463.88 million and $380.6 million, respectively. Together, they comprise 35% of all Honduran exports.

US apparel companies use Honduras as a cheap manufacturing base, running special factories called “maquilas” that operate duty-free and whose production is geared for export. According to the Asociación Hondureña de Maquiladores, the industry has created 146,000 direct and 500,000 indirect jobs and has made Honduras the top t-shirt exporter to the US, second in sweatshirt exports and fifth in cotton shirt exports.

“Most of the maquilas are owned by Honduran companies to which the manufacturing is outsourced, sometimes these are subsidiary companies of the North American parent company, and other times completely independent,” photojournalist Emily Kinskey told BuzzFeed for a November 2018 story. “Most of these produce multiple brands, and the brands change through the year with sourcing patterns. A lot of the clothes are produced in pieces, so one maquila might just do the stickers for 15 to 20 brands, while another just does the hems.”

Moreover, the Soto Cano Air Base is a regional pivot for US Southern Command (SOUTHCOM), providing a huge runway capable of facilitating the largest US transport aircraft as they move to supply pro-US forces around the region, as they did in Nicaragua during the Contra war in the 1980s.

The importance of US foreign policy to Honduran society is reflected in how Hondurans refer to the US Embassy in Tegucigalpa: “they’ll just refer to it as ‘The Embassy,’ not even the US Embassy,” Pine told Sputnik.

Indeed, Puryear noted that US politicians seem to treat Honduras and its people as an object upon which US policy acts and not as an entity capable of agency or deserving of independence and autonomy.

“Everybody in Honduras knows that [then-US Secretary of State] Hillary Clinton is the main person responsible for the success of the 2009 coup that overthrew [then-Honduran President] Manuel Zelaya Rosales. If it hadn’t been for her very active support for that coup, I don’t believe it would have stood, and most Hondurans don’t either,” Pine said. “And then, you can talk about the [then-US Vice President Joe] Biden plan, which was a response to the ‘unaccompanied minor crisis’ in 2014, in which Biden sort of set up this economic support plan that really was support for like mega-development projects that further impoverished people in Latin America.”

“Democrats, with the exception of a number of people in the Progressive Caucus, have really firmly supported this mega-development project, that were the kinds of developments that were responsible for the murder of my friend, Berta Caceres, the indigenous anti-capitalist, anti-imperialist leader, who is remembered in liberal circles as an indigenous environmental activist. But she was so much more than that.”

“So we’ve seen Democrats come behind this like, ‘We need more money for development,’ but there’s no thought about what happened prior to this impoverishment that they are ascribing to lack of development, which, in fact, is because of a military coup that the US supported and was carried out by soldiers trained in the School of the Americas,” located in the US at Fort Benning, Georgia.

Pine noted that US House Speaker Nancy Pelosi and a number of progressive Democrats recently toured the Northern Triangle countries - Honduras, El Salvador and Guatemala - but that several of those lawmakers, including Pelosi, have failed to sign off on key legislation that would bar US support for the Honduran government while it’s engaged in supporting death squads and the suppression of civil liberties. Indeed, some have publicly supported Hernandez.

“Hondurans have been very clear that they want their own solution and not The Embassy’s solution, and that’s part of why they have taken so bravely to the streets - they’re confronting live gunfire,” Pine said. She noted their demands range from the electoralist solution in Zelaya’s Libre party to more radical proposals, such as a constituent assembly.

“People are making bets about when Juan Orlando is going to fall. Very few people think that he’s going to last his entire term. The court case is going to happen in October,” she noted. “The real question is: what comes next?”